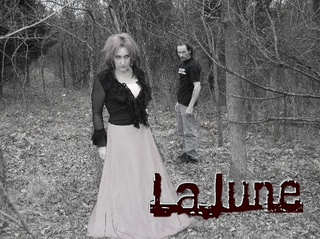 Coming from very different backgrounds in music, LaJune has mixed their blues, rock, metal and country influences to make an eclectic sound which has been compared to Cradle of Filth, Evanescence and Pantera all rolled into one.

April LaJune, lead vocals, grew up singing in choir and later became part of the Lee Mace's Ozark Opry, the oldest opry in the United States - now closed after 53 years. Loving the heavy sounds of metal, she has now joined with Tim for a sweet sounding melodically dark and heavy tone to their music. Some say it's eerily scary and pretty at the same time.

Tim LaJune, lead guitarist, has been playing metal and rock, writing with a little bit of blues style incorporated in his music. Touring throughout New England and establishing himself as a polished musician, he has joined with April to create the unique sound dubbed "Fusion Metal."