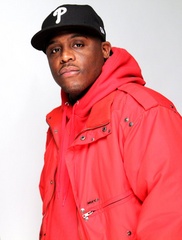 Kilogram is from Trenton New Jersey he is a rapper with substantial lyrics and a holistic message. No person is just one thing and Kilogram’s time in the streets, classroom, and boardroom is a blaring example of this. His music has many dimensions and he effortlessly merges aspects of his life and is relatable to the differences in his fans. He has been praised for his lyrical prowess and tantalizing stage show. Kilogram has been featured in major magazines The Source, XXL, and Hip Hop Weekly. He has blazed mixtapes of prominent DJs such as DJ Kay Slay, DJ Radio, DJ Do-It-All, DJ Lazy K, DJ Absolute, and DJ Enyce. He has worked with artist such as LiL Flip, Trey Songs, Capone/CNN, Joe Buddens, Blu Cantrell, Busta Rhymes, Mobb Deep, Dip Set, D-Block, T.I., and Missy to name a few.

Sirius Satellite Radio Interview by Kilogram interviewed by World Famous DJ Kay Slay
Click link for interview
100.3 The Beat Philly Interview by
Click link for interview
News 12 New Jersey Interview by
Click Link for full interview
A-Game Magazine Interview by Mr. Hype Interviews Kilogram
Kilogram lets A-Game magazine know what he has going on. Click on link for full interview
Kilogram ready to put Trenton's rap scene back on by The Trentonian
By By: SCOTT FROST TRENTON - Even with a pending record deal with Atlantic, a partnership with Eagles All-Pro guard Shawn Andrews and the type of street credibility that's made him one of the most...
Hip Hop Heavyweights Go In With Kilogram by I-Newswire
(I-Newswire) - Trenton NJ, August 9, 2008 -- Hip Hop is alive could be the slogan for Kilogram’s latest CD/DVD “I Go In”. The CD/DVD features such hip hop heavyweights as Lupe Fiasco, Maino, DJ Kay...
p
A
n
E
F
Song Title by Artist Name
987654d
LM
iAnEAqqqq