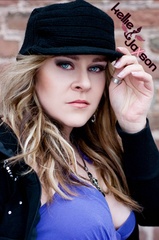 Kellie’s passion since her early years has been dancing. It all started many years ago with a Michael Jackson video that Kellie wanted to emulate really badly. And she did everything to round out her dancing skills and took classes year after year.

At the tender age of 17 Kellie went to the USA to acquire different dancing styles and learn from the best dancers and choreographers in the world. Shortly after her arrival in the states Kellie performed a Janet Jackson choreography at the “ShowStopper Awards”, one of the best know talent shows of the east-coast. And she won. Also the vocal encore convinced the audience and music business people.

Kellie started to like performing in front of a large audience, not only as a dancer but also as a singer. After her return from the US she started concentrating on singing and putting her vocal talent onto a solid ground. Kellie took vocal classes. She tried many different musical styles und took her time until she found her style in pop and r’n’b.

At a further stay in the states the producer of the former talent show offered Kellie the chance to record a song and perform it in a show among superstars like Usher and TLC.

Next to her many shows as a singer and dancer Kellie started taking acting classes and so far she’s been seen in many movies and tv-shows as a lead and support-actress including „Savannah“ (Spelling Productions, USA), „Blaze“ (Barefoot Films) and the RTL Comedy „Alles Atze“ (Sony Pictures).

Right now the dedicated artist is working on a short-movie about womens-discrimination that will be filmed in German and English and will be shown at festivals worldwide.

The passionate singer and dancer writes many of her songs herself. She composed her song “Kick the ball man” for the FIFA-World Soccer Cup 2006 with some songwriters and is working on a song for the skijumping competitions on the German tv-channel RTL. This song will be in English, German, Norwegian and Polish.

In the meantime Kellie made herself a name in Germany and Europe and recorded the first songs for her upcoming single and album with the well-known British producer-team of RUX-Music in London. A video for her first single and a so-called “Star-Diary”, which shows Kellie’s rise in the music-business, will be aired on the internet and involve her fans, are in the making.

Kellie will ganz nach oben (German) by Wir in Detten