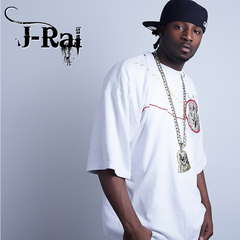 One of nine members of Rochester, NY’s most well known families, The Bash Fam, J-Ral “Rali Blanco” always stood out amongst his peers. While growing up on the Westside, J-Ral was a standout athlete in High School, and even went to college for a year before getting expelled for various offenses. After mixtapes, talent shows, arrests and false promises he decided to leave Rochester. “For whatever reason they don’t come to Rochester looking for talent,” he exclaims illustrating the harsh reality of inner-city life in America. Determined to make a change, J-Ral picked up and moved to South Carolina with his partners Newt and Lacy to “get that money.” “I never had no problem gettin money,” J-Ral laughs. Obvious even as a young emcee, J-Ral not only exemplified a unique sense of urgency and foresight, but wherever he went, he remained an undisputed Boss. After doing business down south he became known as “Interestate Rali” because he never stayed in one spot long enough. “Down south niggaz got a whole different vibe it was way easier to get money cuz it was so spaced out. This is where my peoples got busy—at the time it was a good look.”

While supporting himself, J-Ral continued to dabble in Hip-Hop, opening up for various artists including 50 Cent and contributing to various mixtapes. J-Ral has what most rappers call “that gift” and is able to remember dozens of rhymes without having to write anything down. When asked about this, J-Ral replied “I never had the time to write it down, growing up I just always remembered it.”

His next stop was Atlanta, GA, where he became acquainted with Young Jeezy, Gucci Mane and The Dirty Boys. After absorbing the southern flavor J-Ral decided to get back to his New York roots and moved to Brooklyn, NY. He then joined forces with his partner, commercial real estate developer, Mike Maryan and now devotes all his time to building his Hip-Hop empire.

J-Ral defies the notion that east coast emcees cannot make hit songs. He is sound lyrically as well as having a keen ability to make “that bounce.” When asked to sum up Rali’s flow in one word, a Rochester native proclaimed “I dunno son, there’s so many words to describe him, Dude is just the best I know.” It's clear that the only way to understand J-Ral is to listen to his music.