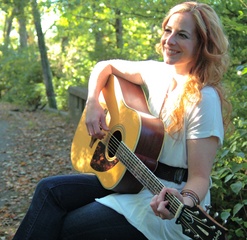 Johanna is originally from Saratoga Springs, NY. She has played music her entire life - beginning with the violin at age 7. She later joined the Empire State Youth Orchestra, where she got the opportunity to tour and play in Austria and Hungary. She was also involved in band and chorus.
In 2000, Johanna moved to Nashville, TN and by 2002 began learning the craft of songwriting (and how to play guitar!).

Since then, she has joined the band, Shed, where she adds the harmony vocals to their sound. The summer of 2007 brought her the opportunity to tour with Shed to and play at venues such as Indian Ranch and the Hampton Beach Casino, where they opened for Gretchen Wilson. They made this trip again, along with opening for Charlie Daniels this fall...

Johanna is a singer/songwriter whose musical influences and style are from rock to country, pop to folk. Her lyrics are true-to-life, giving words to feelings that many of us have a hard time finding...