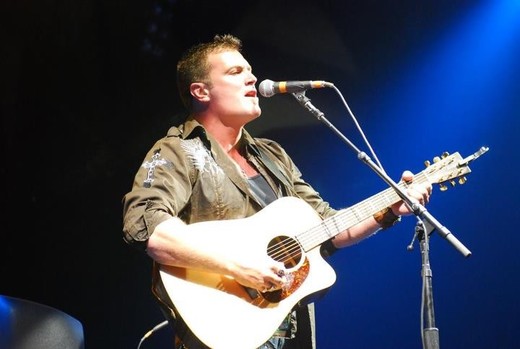 Jeremiah started playing traditional country and bluegrass on a 5-string banjo while they and Mr. Jams attributes his passion for music to his father, who instilled a strong rooted love and respect for classic artists.

Another early musical influence was Jeremiah’s late grandmother. She played popular and secular music on the keyboard throughout the 1950’s to mid 1980’s in the Lehigh Valley, PA area.

Jeremiah started performing at family gatherings in his early adolescents and then progressed in various rock bands throughout high school and college, Jeremiah believes he received his real education in the working class touring throughout the Northeast. Mr. James started performing acoustically and with his band over 150 dates a year and has opened up for various National Acts. Starting in 2000 Jeremiah spends much of his time on the road with his band Tandem or in Nashville where he currently is placing the final touches on his new CD.

In the past few years Mr. James started working on numerous projects that includes both song writing and touring.

Many remarked that Jeremiah shows the soulful aspect of making music and his continues efforts to set higher standards in his music career in all aspects.

Musical style influences include everything from country, Southern Rock, Classic Rock, to include R&B.

Some of the artist that has played a major influence for Jeremiah to become the artist he is today is Willie Nelson, Kid Rock, Johnny Cash, & Waylon Jennings.

Jeremiah James takes Nashville by Storm by
“Posted: Nashville, Tn. January 31, 2012 Jeremiah James, performed at Cancun Cantina in Hanover, MD this past week end, he has been coming there for a couple of years. . You Gotta Have A FANTASTIC...
p
A
n
E
F
Song Title by Artist Name
987654d
LM
iAnEAqqqq