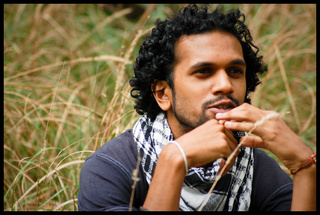 Jehan has been around the traps long enough to have learned a thing or two. After playing with a few different bands he finally became a solo artist when he recorded his first EP "Shooting Ships and Sinking Stars". His work is the creation of a ten year relationship with the guitar and many years of playing the scene. It started with open mics and busking and eventually resulted in gigs at the Basement, the Supper Club, the Annandale and more. It's been a slow progression and Jehan is in no hurry. All that matters is honest music that communicate that little buzzing in his head and ears. He has shared the stage with Saving Grace, Leroy Lee, Alice Terry, Jenny Biddle, James Edgar Francis and even Abby Dobson (from Leonardo's Bride) on one occasion. His many years of struggle will be followed by many more and this is not a bad thing for this artist. Music has become his cause to fight for and he will play to any willing ear he finds.

Jehan Gonsalkorale by Catsask
Jehan Gonsalkorale is an insanely talented songwriter with a deeply haunting vocal delivery. At The Gate tears at the heart and reveals what it means to awaken true emotion.A seasoned performer...
p
A
n
E
F
Song Title by Artist Name
987654d
LM
iAnEAqqqq