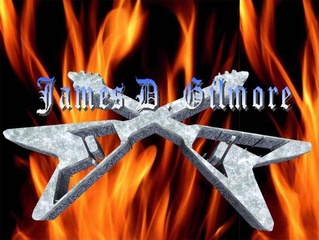 These days, it’s considered “uncool” to be able to play & tune your instrument. Midwest Independent Records is proud to introduce the most “uncool” guitarist in the Midwest!
Since his solo debut release in 1992, James has made a career of both entertaining and inspiring, not to mention scaring the hell out of other guitarist!
Michael Angelo Batio says James “has a gift of mixing over the top shred guitar with really creative melodies, as well as arpeggiated lines”, & calls James “a true guitar great!”. Steve Vai has compared James’ style, feel, & technique to that of Yngwie Malmsteen’s. Also, the local, national, & world press have compared James’ playing to many great guitarist including David Chastain, Yngwie Malmsteen, & Joe Satriani as well, but also state that “he has his own style & that his ability certainly ranks up there with his hero’s.” Term’s like “Virtuoso”, & “Master” are often used by peers, & press worldwide to describe James’ talent.

A playing pro with over 30 years experience, James has released 5 full length solo CD’s, plus a DVD on Midwest Independent Records, & has worldwide distribution with over 50 online distributors, & over 2,400 stores in the U.S.. His CD’s have received radio airplay in over a half dozen countries to millions of listeners. A Song Writer & Music Publisher with BMI, he’s also an accredited Studio Engineer & Record Producer, & is the Owner & Chief Sound Engineer of J.D.G. Studios as well. He has Recorded & Produced on demo’s & other projects with members of Unbound, Chastain, & CJSS just to name a few, and has also recorded music tracks for commercials on TV & Radio as well.

James also has over 25 years experience as an instructor & clinician, including 3 years as “Head of the Rock Guitar Instruction Dept.” in the “Masters Lesson Program” at CSM in Cincinnati, & even appeared in their TV commercials! He has literally taught hundreds of guitarist how to be better players. He’s also appeared in several national rock magazines such as “Musician” & “Metal Edge”, doing everything from interviews, to giving touring tips.

Currently, if he’s not in the studio, James can often be found on concert & clinic stages promoting his new all instrumental DVD – “Inside The Madness”, & most recently sharing those stages with other incredible artist like Michael Harris, Joe Stump, Matthew Mills, Arch Rival, & others! Also, writing is already underway for the next studio release. The new special projects CD – “Jam Session-Volume 1” is also now available! These solo CD’s/DVD’s serve as proof of James’ monster shred ability.

Over a dozen reviews online! by Midwest Independent Records
Excerpts of over a dozen reviews around the world, including reviews from Steve Vai, & Michael Angelo Batio are currently posted in the blog on on the My Space page, & on the official...
p
A
n
E
F
Song Title by Artist Name
987654d
LM
iAnEAqqqq