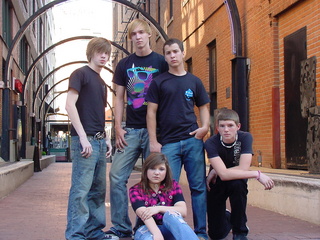 Jaci Butler & Those Guys are an up and coming teen rock band from the DFW area that formed in January of 2009. Jaci, only 14 years old, brings an unparalleled voice & energy to the stage and is destined for stardom. With trips to NY City for meetings with Atlantic & Universal records along with a recording trip to Hollywood with Kelly Clarkson's producer, both at the age of 12, it is only a matter of time before the entire world knows of this singing sensation. In addition, she now has an incredibly talented group of 16 & 17 year old young men behind her that can do it all. Having only played together for ten months, "jaci & these guys" have already won several BOTB's including the 1st annual Texas High School Rock Off at the House of Blues in Dallas, & recently placed 2nd in the nationwide Slurpee virtual BOTB with their new release "Reality", which was produced by Hollywood's own James Lugo. They've also qualified for the finals of the 1st annual NAMM sponsored SchoolJam USA competition & will be performing in Anaheim, CA Jan 16th against 9 other teen bands from across the country for the grand prize of a trip to Germany to play at the International SchoolJam competition. The band is in the process of completing it's debut album with Mr. Lugo that will be out early 2010. In the likes of Paramore & Halestorm, these teens will have you on your feet and rockin'! Venues played include the House of Blues-Dallas, Curtain Club, Liquid Lounge & The Bone in Deep Ellum, Maximedia Studios, Southfork Ranch, The Door-Plano, The Harbor in Rockwall, Skillman Street Pub & O'Reilys

Have PA system for small venue, 300 or less