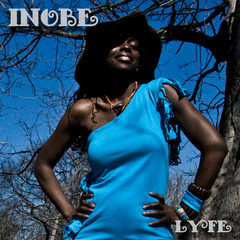 “The Inobe Monologue – An Urban Fairytale”

Prelude
My story’s a sort of urban fairytale. You know the kind that starts off “once upon a time” and you expect it to end with “happily ever after.” In the middle, of course, ugly stepsisters get left behind, dragons are conquered and a prince sweeps me off my feet.

My story opens like every other Soul singer’s tale… Once upon a time in a small town far, far away in the South, Inobe sang gospel in her grandfather’s church. She attended a high school for performing arts. She went to college and graduated with a degree in Music Management. Musical theater, talent shows, showcases, yadda, yadda, yadda. I’m sure you’ve heard this part before.

Every story is summed up by the who, what, when, where and why. But the most fascinating part of any artist’s story is the why. Why did Billie sing Da Blues? Why does Maya’s caged bird sing? Why am I Inobe?

“Someday My Prince Will Come” - Sleeping Beauty
It’s funny; when friends look at my scrapbook they say I’m all smiles. Birthdays, recitals, family reunions graduations: all the Good Old Days. But I’m looking at some of the same pictures and remembering a Bittersweet drama. Some days were Summer Time, but most days I didn’t know whether to laugh or cry. I usually chose laughter because at least it kept people from asking questions.

Behind some of those photos there was abuse. Behind most of those photos there was a casual neglect. Behind all of the photos there was self doubt and fear. You see, I grew up a preacher’s kid and it wasn’t right to sing secular music. They’d build me up to “sing some Tina” at family reunions but then Break Me Down before they left. I grew up with a mother who wanted to sing when she was young. But her unrealized dream became my forbidden passion. If I wanted to sing, I had to be my own coach, promoter and fan club. I grew up in the 80’s and 90’s when it wasn’t in style to be dark-skinned and natural. A little girl never knew there were so many synonyms for black.

Sure there were good times too, but the weight of the disappointments lulled me into a coma over the years. What if they were right about me? But somehow I knew Lyfe wasn’t over for me. I’d close my eyes and sleep for a while, but someday my prince would come and wake me with an Impressionable kiss. At my lowest point, someday finally became Today and my prince stepped on the scene. He was there all the while; I just had to open my eyes. When everyone else had given me up for dead, Jesus came into my life. He loved me with a Love For All Seasons. He assured me I was beautiful and my story wasn’t necessarily meant to be sung in church but out in the world to shine light on dark situations.

“If The Prada Fits” – Cinderella
Suddenly I understood my life’s purpose, doors began to open and I could Find A Way. You know the whole mice and pumpkin become horses and carriage story? It’s true! God sent the unlikeliest of angels and made things happen. When I moved to Atlanta, I found myself surrounded by people that believed in the vision and were willing to help. Musicians, producers, DJs, promoters, web designers, stylists you name it, they were sent my way. To my surprise, I was even featured as inspiration to the fictional lead character in Eric Jerome Dickey’s best-selling novels “Naughty or Nice” and “Chasing Destiny.” Of course this part of the story isn’t complete without a few ugly stepsisters, haters as we know them. But you know what? I grew up with professional haters who could actually hurt me so these trifling amateurs weren’t about nothing. Even when people I trusted would Do It Again and turned their backs on me, I knew I had to Go On without them. I was determined more than ever to get my story out.

“’Tis Thousand Pities, Anything So Good Natured Should Be So Ugly.” – Beauty and the Beast
Most independent artists would describe their relationship with major labels as David and Goliath. I see it more like Beauty and the Beast. While I love The Way the independent community has nurtured me, I understand that the majors have the gold necessary to tell my story beyond my little village. It’s definitely a love-hate thing. The beast is repulsive, but I know under the thick callous hull of corporate greed, there still beats a heart that loves real music and artistry. However, like a black widow, the beast would only know about me if I made enough noise in the web. So I decided to do it myself and take the show on the road.

“We’re not in Kansas anymore” – Dorothy
I wish this part of the story was as simple as “Ease On Down the Road”, but it’s not. It’s “Climbing the Rough Side of the Mountain.” Releasing my own records has been a series of dogfights with musicians, promoters and execs. Lions and Tigers and Bears, oh my!

But through it all, I’ve sold records in North America, Europe, Asia, Africa, and Australia. My records are played regularly on college and community stations throughout the United States and internationally on internet radio. I’ve been blessed to have shared the stage with India.Arie, Ashanti, Nivea, Vivian Green, Roy Hargrove, Musiq Soulchild, Donell Jones, Kindred the Family Soul, Tony Rich, Debra Killings and Donnie. I been even more blessed to have toured U.S. military bases around the world and sing for our brothers and sisters in uniform. I’ve sang my songs in Germany, Belgium, the Netherlands, Greenland, Kuwait, Afghanistan, Kyrgyzstan, Uzbekistan, Djibouti, Qatar, Korea, Japan, Guam, Kwajalein and the Hawaiian Islands.

Growing up I didn’t know why trouble loved to Jump On My Back. But now I know why and I know why I Am Inobe. When I mentor young girls at a group home in Atlanta I can share my stories of neglect and assure them they are beautiful when I sing “Sista Sista.” When I meet with soldiers who are risking everything for a cause they’re unsure of, I can tell them my stories of being left hanging but assure them they are not forgotten when I sing “Come Home.” When I encounter other artists who are discouraged with the mainstream diet of marginalized talent served over homogenized beats, I can assure them their story has purpose when I sing “Do What You Do.” When I get emails from fans as far away as France, Korea and Russia who say they’ve been waiting for something positive in today’s music, I can assure them the sun also rises when I sing “Front Porch.”

There’s one truth I’ve learned about music; people like your music if they can stretch to identify with it, but they don’t fully appreciate it unless your music stretches to identify with them. As for the “happily ever after” part, the story is still unfolding so I guess we should say “…and Inobe lived happily every day by day.”