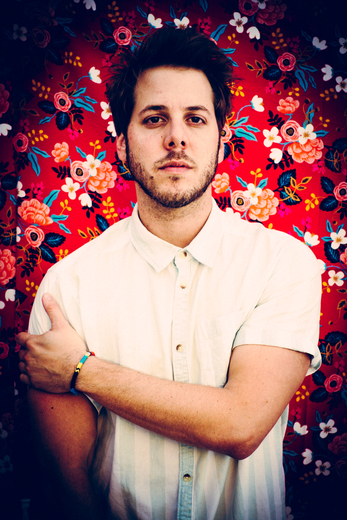 Race the Tide is the project from multi-instrumentalist Jesse Macht. His forthcoming self-titled record was recorded between the personal studio of Lord Huron, Whispering Pines, and Highland Park’s Sound 69 Studio. With the record’s basic roots in Americana familiarity like Ryan Adams, Wilco and The War on Drugs, the album benefits from its pop electronic influences such as Tycho, Blood Orange, and LCD Soundsystem and progresses to a more well-rounded and evolving sound.

The album is rooted in the idea of collaboration. For Macht, it is a vital part of the sound saying, “it is the communication of players and the instruments that help songs grow. I believe that more minds are better than one, and I wanted to provide a framework and a skeleton for players to indulge their creative prowess”. While Macht wrote, played guitar, and keyboards on much of the record, other players include Rob Humphreys and Gavin Salmon on drums, Tyler Carrol (Allen Stone) on bass, Ken Belcher on guitar, and Will Herrington (Lukas Graham), Mark McKee, and Ben Allemon (Ryan Adams, Grace Potter) on keys. At the helm, producer Justin Tocket said, “It’s all about casting. These players understand the mission we were on in hunting down a sound that is familiar to the influences, but gives the unique sensibility that is at the core of the songwriting.”

Macht was born and raised in Los Angeles and attended school at Washington University in St. Louis where he studied music and performed in a band that eventually was featured on indie film and tv soundtracks including James Franco’s “Good Time Max”, LA Ink, The Voice, and the breadth of Viacom programming. Since those humble beginnings he has toured and co written with many notable writers including Sean Douglas (Thomas Rhett, Jason Derulo, Demi Lovato), RoboPop (Maroon 5), James Smith (The Spring Standards), Katie Boeck (Spring Awakening) Tyler Lyle (Pulse), Audra Mae (Warner Chappell) and many more.

Under his own name, Macht has released two singer/songwriter efforts: The Acts of Providence (produced by Aaron Tap, guitarist for Matt Nathanson) and Suitcase Heart, the latter of which garnered Macht AXS’ Top 3 Los Angeles Breakout Artist of 2014, at Zak Brown Band’s Southern Ground Studios. Soon after, Macht was diagnosed with an SVT, an extra electrical impulse in the heart that pushed his heart rate to over 260 BPM. After being confronted with that procedure and his mortality he has been unabashedly chasing down his life dreams and started performing everywhere he could including over 100 home concerts around the world including a myriad of Sofar Sound Concert stages.

This fall, Race The Tide will be featured as the face of Airstream’s Endless Caravan touring his arts and culture series where he will travel the country in an Airstream performing at people’s homes and facilitating community arts events in over 15 states around the country bringing different people together to share their talents, passions, and love for the arts and research in a brand new styled adventure series.

Intro to RACE THE TIDE by refreshing and new
We love discovering new and upcoming artists, so it's with great excitement we introduce you to Race The Tide (Jesse Macht). His latest offering 'Rip Tide' opens with an LCD synth/piano sound that...
p
A
n
E
F
Song Title by Artist Name
987654d
LM
iAnEAqqqq