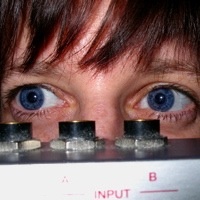 Keyboard Unsigned Artist of the Month by Keyboard Magazine
iamjen (www.iamjen.com) is our Unsigned Artist this month, for her The Broken EP. This sixteen-minute wonder delivers a megadose of brilliant production on its four tracks. The album was created...
One Woman and Her Computer by Phantom Tollbooth
The Broken EP Artist: iamjen Label: Indie Time: 4Tracks/ 16:00 minWho knew one woman and her computer could be so intriguingly powerful. Simplistic and smooth vocals compliment her pure electronic...
Starpolish reviews "The Broken EP" by Starpolish
i am jenIAMJEN’s The Broken EP is a self-produced four-song introduction to Jen Scaturro, a one-woman super band. Jen crafts electronic pop music in her homemade NYC apartment studio by playing...
The Broken EP by indie-music.com
Less is more in all aspects of this offering by I am jen. The Broken EP is made up of four flawless songs that left me wanting more, to the point where I went hunting online to see if I am jen had...
Cracking Debut by Alternative Malta
October 21, 2004 Review by Robert Pisani @ Alternative Malta Cracking Debut " I am jen - The Broken EP It seems that I am jen is a bit of a dark horse. There is virtually no information about her,...
p
A
n
E
F
Song Title by Artist Name
987654d
LM
iAnEAqqqq