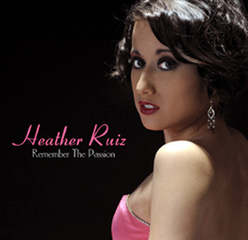 Since the age of 3, Heather Renee Ruiz knew she wanted to be a singer. The power that comes out of her petite frame combined with her natural musicality and beautiful tone has carried her far. For years, she traveled around the Puget Sound with Dance Theater NW, which gave her the opportunity to sing with a live orchestra. One orchestra member once said, “She has the voice of an angel!” She also made several trips to New York dancing, singing and impressing Broadway producers with her natural talent. This talent helped her win first place out of 30,000 contestants at a local singing contest in 2005.

More importantly, however, has been her goal of making a quality album that displays her versatility. Heather has been sending out demos since she was 15, but 2 years ago, she decided to record a complete album that would show her passion for various musical genres. In between work and college classes, Heather has spent time and tears visiting various local recording studios, meeting with musicians to arrange music, and recording songs she has worked on.

The first year of this project was definitely a learning experience and continues to be. Heather experienced many ups and downs, but she pressed forward, and in the beginning of 2007, she began working with a Grammy award winning songwriter/producer, Kenny LaMar. Kenny and Heather worked for months on finding the right sound and accompaniment to suit her purer and classical sounding voice. In May, Heather visited Triad Studios in Redmond to record a 17-piece jazz band. Hearing “Ain’t That a Kick in the Head” played by a live brass section really made this song and the other show tunes come to life. She also had the pleasure of working with Sue Ann Carwell, an established singer/songwriter who has worked with Whitney Houston, Celine Dion, and Christina Aguilera to name a few. Sue Ann ended up recording some amazing backup vocals on one of Heather’s originals.

In the latter half of 2007 and early 2008 Heather experienced a couple of photo shoots an began the final mixing stages of her unique project. Recording a few vocals and doing some final missing at Studio X (once “Bad Animal” owned by rock band “Heart”) in Seattle gave her more insight into the musical scene of the Pacific Northwest. Heather mastered her CD at another Seattle hotspot, RFI CD Mastering, where Rick Fisher, who has engineered at Capital and Steve Miller’s Sailor Studio, finalized the audio portion of this project.

Now that her debut album is complete, Heather is already making plans for the second CD. In the meantime, her team is working hard on promoting and advertising “Remember the Passion.” A commercial is in store, as well as radio play, and she’s currently trying to display her CD’s in stores, such as Wal-Mart, Border’s and Target. Stay tuned to what happens next, especially her performance schedule and new music video: “The Very Thought of You.”

Ballad singer wins Puyallup Fair contest by
Out of 30,000 participants Heather Ruiz sprung ahead with her rendition of Josh Groban's song, You Raise Me Up.
Heather Ruiz - Remember The Passion by Tacoma Weekly
Puyallup singer Heather Ruiz's album "Remember The Passion" is an astounding showcase of locally grown talent. The album is a mix of timeless jazz and classical songs, along with a few originals....
Local singer combines the old and the new by Tacoma Weekly
Local singer combines the old and the newBy John LarsonTacoma Weeklyjlarson@tacomaweekly.comPublished on: September 04, 2008Heather Ruiz is as comfortable singing pop standards from 50 years ago as...