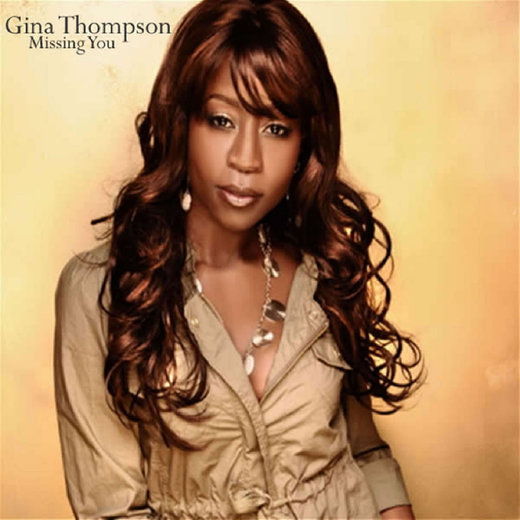 There are few female R&B vocalists, in Gina Thompson’s case over ten (10) years ago, that can attest to the success that a platinum selling artist with albums released on two different major record labels (Mercury/Motown and Elektra), working with the top record producers in the industry (Stevie J., Sean “P Diddy” Combs) and doing a single with Grammy Award Winner, Missy Elliot, that can talk about it today as their new single rises up the charts.

Having sold over a million CDs worldwide, the platinum selling artist is now set to release its third (3rd) album, "Missing You" on February 3, on Sunset Urban Records. “The single went to number one right away at Music choice’s Musica Urbana Channel so we had to get this out as soon as humanly possible, and it still took a few months for Rod (Millwood) to finish the CD,” says Don Lichterman, the head of Sunset Urban. Lichterman says the Urban Record Label will work this music vigorously to HipHop radio stations and to urban format stations. “Rod (Millwood) gave us many versions of the song to work so my plan is to send this hip-hop and urban along with world music stations and reggae stations,” says Lichterman about the new CD entitled, Missing You.

Rod Millwood is very well known for his staff producer deal he has in place with Lichterman’s label. Millwood has produced international top selling artists Mykal Rose (Black Uhuru), Mark Simmons, Roz, L. Myers, Don Ward and Kevin Hart along with his work with Gina Thompson. Millwood is also the owner of the world famous comedians club located on the popular South Street in Philadelphia. Lichterman considers Millwood one of the top producers in the world today. “Rod makes everything sound at such a high level that he has carte blanche with the label,” says Lichterman.

Over the course of Gina's career, the accomplished R&B and Soulful vocalist has released music at two (2) of the top record labels in the world, before now releasing her third (3rd) album entitled Missing You at the Sunset Urban Record Label. Her new single, "We Don’t Even Talk No More," has already shot up the charts according to Music Choice and its Musica Urbana Channel being the #1song in its 1st week going for radio adds, and is currently going to try to be the most increased played song over the next few weeks. With The label is servicing all HipHop and Urban radio stations tracked by R&R (Radio & Records) and at BDS/Nielsen, since its release is not until next month, the label expects the song to be added to all major radio stations over the next couple weeks.

The Missing You CD is a very unique styled CD. It boasts many versions of the hit single all produced by Rod Millwood. Lichterman expects up to 4 of those versions to get radio play. There is also a club mix produced by Millwood that could be one of the favorite versions of the hit single. There is also a dancehall style and even a reggaeton version that are potential hits themselves and then there is a smooth R&B version of the song. “When I sat with Rod last year to hear the new music, we did not know what way to go with the songs,” says Lichterman and “then it hit me to use all of the great the versions of this songs and work them to a few radio formats. Having these versions makes this even a more fun project for us to work this year. I think my favorite version is the dancehall style and the radio promotion people love the club mix to work. We should all have these issues at labels.”

"Rod (Millwood) is one of the hardest working and most gifted producers on the planet," states Don Lichterman, President and Founder of Sunset Urban / Sunset Records. "And, as far as my business plan at Sunset Urban, having the new Gina CD at the Sunset Urban label is incredible for what is an independently privately owned record company. To be able to release a major recording artist whom I had worked with when she did her Mercury album is almost surreal for me today."

There is a plan to set up Sunset Urban shows in select cities like New York City, Philadelphia, Baltimore and Washington DC in March.

Having sold over a million CDs worldwide, the platinum selling artist is now set to release its third (3rd) album, "Missing You" on February 3, on Sunset Urban Records.