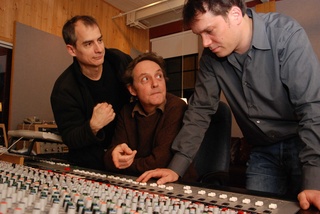 The Geoff Lapp Trio'......has been a cornerstone of the Montreal jazz scene since 1999. Extended gigs at many of the town's premiere night spots have established the group as a hot draw for aficionados in search of that heady space where soulful and cerebral fuse. Drawing upon a wide palette of jazz moods, 'The Geoff Lapp Trio' delivers a sound that is tasteful, innovative, and infectiously swinging.

Born in Montreal in 1953, Geoff Lapp was trained in the classical tradition and studied at McGill University under widely respected jazz pianist Art Maiste. During the early years of his career, he gained experience in the pop music world touring with the likes of Michel Pagliaro. From the early '80s onwards, he devoted himself fully to the jazz idiom. As one of Canada’s most accomplished pianists/composers, Geoff Lapp became a sought-after accompanist for a host of top Canadian performers.

In addition to his own trio work, Geoff has performed and/or recorded with renowned jazzmen such as Paquito d’Rivera, Don Menza, Richie Cole, Bob Mover, Sonny Fortune, and Slide Hampton, among others. He has also performed extensively in festivals and clubs worldwide. At home in Quebec, he is a mainstay on the vibrant jazz scene, and has performed with a panoply of local luminaries: Michel Donato, Jeri Brown, Peter Leitch, Ranee Lee, Denzil Sinclair, John Labelle, Charlie Biddle, Charles Ellison and the Montreal Jubilation Gospel Choir.

David Laing was born in Kitchener Ontario and grew up in a musical family. He was introduced to jazz music by his father and older brother. Dave studied at McGill University in Montreal and began his professional career shortly thereafter. In the past fifteen years he has recorded, toured, and performed with such national and international stars as Jimmy Heath, Junior Cook, Ed Bickert, Denzal Sinclaire, Ben Monder, and Ranee Lee. He currently resides in Montreal where he also teaches at McGill University.

Typical set is 45-60 minutes. Concert setting- one hour plus.

The Geoff Lapp Trio performs both standards and originals. The group has a large repertoire of great jazz classics....such as songs by Cole Porter, George Gershwin, Irving Berlin, Harold Arlen, and of course, songs from the Great American Song Book.

This review just in! by Pianist Geoff Lapp and his
Published in allboutjazz.com By Budd Kopman Pianist Geoff Lapp and his trio are in high demand in their native Montreal, Canada, and if Stained Glass is any indication of how the group plays live,...
allmusic.com by Jazz Reviewer Ken Dryden
Published on allmusic.com by Jazz Reviewer Ken DrydenGeoff Lapp is hardly a newcomer to the jazz scene, but like many Canadian musicians, it adds to the challenge for him to get exposure outside of...
WHERE DID THIS GUY COME FROM? by WHERE DID THIS GUY COME FROM?
Geoff Lapp is one of the most reliably soulful and melodic jazz pianists in Montréal,but because he usually pursues he trade in unspectacular supper-club gigs, even his colleagues don t often give...
PRESS REVIEWS by
Geoff Lapp“…Lapp demonstrates an equally impressive array of talents as soloist, accompanist andcomposer… his… technique contains equal proportions of passion and lyricism, and he has notrouble...
in the classic piano trio setting. by Grego Applegate Edwar
Turning to Geoff Lapp’s CD,we have a mixture of originals and standards in the classic piano trio setting. The rhythm section knows what to do and bassist Johnston gets a fair amount of solo time....
Review Links by
http://www.jazzpolice.com/content/view/7503/79/http://www.allaboutjazz.com/php/article.php?id=27650 http://allmusic.com/cg/amg.dll?p=amg&sql=10:fjftxzq5ldje ...