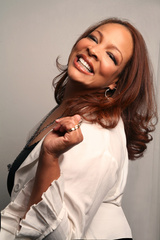 Please contact about the venue because we
are flexible. For a full production
any concert venue for live R&B band (about 10 members including 2-3 horns and me).

Garage Theatre presents Ray Davies by Kinks Links
....The eight-piece band, lead by Gail Lou (who also played a convincing Mrs. Skoll) was very tight and really gave the show the energy it needed to tell the story...
by
---2003 JLSC Grand Prize Winner in the Children's Music Category: "I Can Be The One---2003 JLSC Runner-Up in the Children's Music Category ;"Ch-Ching---"Beloved" JLSC Honorable Mention in the Jazz...
CATASK.com- Featured Artist by CATASK Music and Entertainment
Gail Lou ...continues to get the love of us all wi...Gail Lou ...continues to get the love of us all with her beautiful delivery of "Bring Love to Get Love". Leading us to times when a true voice...
Talkin' Broadway, regional news by
...The most polished performance is that of Gail Lou. She is regally dotty as the Queen (Ludwig's mother) and most amusing as Natalie, a stereotypical culture vulture, New York Jewish matron...