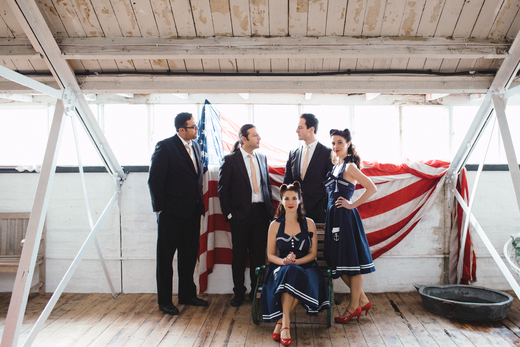 The Bellinis were formed late one night in a dingy basement bar in Soho. 3 guys were on stage playing some swinging jazz when the doors burst open and 2 brunettes bounced in all lipstick and laughter. The bar tender had their usual order ready at the bar: “2 Bellinis for the girls!” was the cry.

After a little coaxing the girls took to the stage and with the hottest band in town that night, the crowd went wild.

That night The Bellinis were born.

With a tag line that reads “bringing old fashioned glamour to modern hits”, their infectious take on today’s hits has turned out to be a firm favourite with audiences of all ages and music tastes. Crossing hits from the 70’s 80, 90s and today with old arrangements from the bygone era of swing and Dixieland, and fronted by 2 glamorous singers portraying the style of the war time pinups, their shows have proven to be a massive hit with audiences of all ages, both in the UK and overseas. They have played in some of London's top venues including Harrods, the Gherkin and the Corinthia Hotel as well as being flown out to perform in Milan and Portugal.

A brief glimpse of their set list shows why their performances are proving to be a hit with everyone – Lady Gaga, Rihanna, The Ting Tings, Adele, Blur, The Killers, Elton John, Michael Jackson and Prince are just a few of the artists they cover.