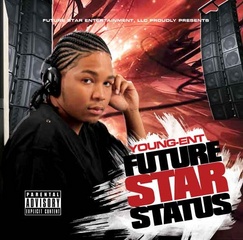 Young-ENT. (Young Entrepreneur) – He currently resides in Baltimore, Maryland but he has also lived in Montgomery, Alabama. He has a fan base from the dirty south to the east coast. Music has been a part of his lifestyle since the young age of 13. Now, this 25 year old hip-hop phenomenon has gained many fans and earned much respect in the music industry. Independently, he has released two mixtapes: “THE PRACTICE I & II” as well as an album “WHOLE ‘NOTHER LEVEL.” As of right now, Young-ENT is unsigned and ready to release his highly anticipated EP entitled “FUTURE STAR STATUS.” He is also working on another mixtape: “THE PRACTICE III” and his next album entitled “CHAMPION 2010.” Young-ENT is a member of ASCAP and has his own publishing company. He is also working towards making an impact with his own record label, Future Star Entertainment, LLC. With 12 years experience in the music industry, including a few minor set backs here and there, this very talented individual has admitted that he has learned from his mistakes. “I let the past stay in the past and keep it moving… You feel me? I can only do what’s best for myself and my music career at this point in my life. The fact that I started out early at a very young age has helped me become a better artist, performer, songwriter and businessman. I feel like right now I know what to look for and what to expect. Ten years ago I was performing at community centers in front of 20-30 people… five years ago I was putting on a show in front of 200-300 people in night clubs… Now it’s time to start rocking crowds of 20,000-30,000 in sold out arenas. I feel like it’s my time. I feel that I am one of the most talented artists that has yet to be discovered… and that’s some REAL TALK!” For more info on this artist contact: Future Star Entertainment, LLC.

"Q" Music Spotlight: Young-ENT by Kelson"The Urban Informer"
Young-ENT. (Young Entrepreneur) – He currently resides in Baltimore, Maryland but he has also lived in Montgomery, Alabama. He has a fan base from the dirty south to the east coast. Music has been...
p
A
n
E
F
Song Title by Artist Name
987654d
LM
iAnEAqqqq