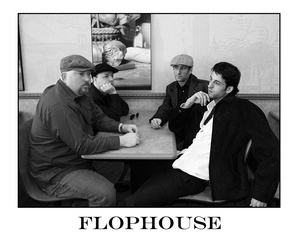 Flophouse's extraordinary sound has not gone unnoticed. Hand picked from thousands of entries, Flophouse was chosen to perform at Eric Clapton's Crossroads Festival in Chicago in 2007. Clapton's acclaimed event received massive media coverage in Rolling Stone, VH1, PBS and more. Locally, the band regularly appears at “A List” venues including Robustos Lounge, the Hard Rock Café and the Magic Bag Theatre, in between gracing festival stages across the country. “We play every show as if we are playing a sold out concert at Madison Square Garden …even if it's at Jimmy's Sports Bar and Fish Fry,” explains Super B.

And that's what keeps the fans coming back for more. That, and a guaranteed “booty shaking” experience. Flophouse's funky musical voodoo entices dancers to pack the floor in celebration of a band whose unstoppable grooves also demonstrate a genuine passion for creating music. “We're just four guys who love to make music - and it shows. Our philosophy is simple - make it funky and move the crowd!” affirms Victor Colon.

And that they do; Flophouse's music moves you from the inside out. Currently, in the studio recording their first full length CD, you can get your own taste of Flophouse with their party-inducing EP “Get Loose” (Boiler Room Records), available NOW on CDbaby.com and iTunes!!

Review of Flophouse Show by
Finally. Tail Gators and the real reason for my nights adventure. The band I came to see, Flophouse, was not up yet. There was another band getting ready to go on in a few. I grabbed a bier and...
Flophouse Review by www.rockoration.com
If you like funk - get down! 'Cause Flophouse is in the house! Reminicent of the Parliment of Funkadelic, this original band will have you groovin' like the days of wearing bell bottoms. Not...
Flophouse Review by LocalMusicLife.com
Today's pick is one of my new personal favorites. Their creative blend of rock, funk and blues is sure to put a smile on everyones face. Distinct vocals backed up by the wide range of everyone in...
Flophouse plays ERIC CLAPTON's Crossroads Festival by The Detroit Free Press
FLOPHOUSE has just been added on to... Eric Clapton's Crossroads Festival @ Toyota Park in Chicago, IL on Saturday, July 28th!!! Flophouse will share the stage with: Eric Clapton, Jeff Beck, Doyle...