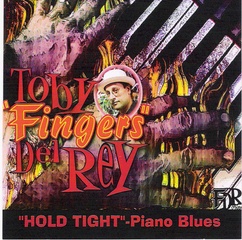 Toby "Fingers" DelRey developed his hot stylings while a lad at the St. Ignatius Orphanage for Wayward Sinners. Sister Serenity, a crusty old nun with a musical bent, sensed the child's prodigious talent and, taking him under her wing, tutelaged him with a combination of Jelly Roll Morton, Johann Sebastian Bach and a strict regimen of dowsing the keyboard of the rectory piano -- a 1911 Flambe-Carbone upright -- witha solution of molasses and 190 proof corn liquor, setting it ablaze withthe cherry of her White Owl and forcing the young genius to extinguishthe flames with his speedy scales. Although the good Sister perished in the mysterious fire that destroyed the orphanage, the young prodigy was to be forever under her influence. A shack in the backwoods near Gatersburg, LA was where Fingers (as he came to be called) spent the next fifteen years. Just him, the Flambe-Carbone and swamp gas, entertaining the wildlife with his relentless drills and earning "likker money" by playing for local church functions and the occasional wedding. The first "Fingers" recording, "Flaming Teeth", was transcribed on a dictaphone machine at Madam Shampayle's Gumbo by a merchant seaman who played it relentlessly for blues piano fans and loose women in ports 'ocall all over the globe. The playback heads finally wore through the original master, which is lost forever, but these new recordings --made in a modern facility with all the benefits of 21st century technology -- are available for you to enjoy. As Finger's remarked recently in a rare moment of verbal lucidity: "The blues is in my blood, the stride is in my soul and the fire is in my heart."