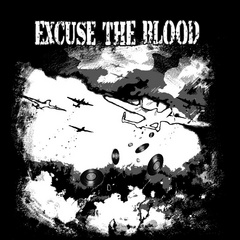 Formed August 2008 in San Francisco, California, Bryan, Adam, and Jonathan created Excuse the Blood after years of playing together in SF punk outfit Dekoiz. Excuse The Blood started with a mission to write songs as a unit, pulling from all their favorite influences. The result is a unique blend of Punk, Hardcore, Reggae, and Ska that cannot be easily categorized. The common thread that runs through all their music is energy, aggression, and songs that keep the listener interested, wondering what will happen next. Simply put, Excuse The Blood is three good friends hell bent on writing their favorite music and exposing it to as many people as possible. Bryan, Adam, and Jonathan have been able to successfully pool their musical backgrounds and influences together resulting in a band that they are extremely excited about.

No Front Teeth Review by No Front Teeth Zine UK
Hardcore punk from San Francisco featuring members of DEKOIZ and continues in a similiar vein -a fast and aggressive blend of early punk and hardcore but EXCUSE THE BLOOD have an added ska/reggae...
!Upstarter Review by !Upstarter
!Upstarter ReviewExcuse The Blood is a Bay area 3-piece outfit with a pretty eclectic mix of sounds. Without trying to pigeon hole them, they sound like a mix of Slapshot-esque hardcore and a...
Punk Globe Review by Punk Globe Magazine
Punk Globe ReviewExcuse The Blood kicks out this demo at a break neck speed which is unrelenting 'til the end, with nose bleedin' drumbeats, thudding bass, infectious guitars riffs and chanting...
p
A
n
E
F
Song Title by Artist Name
987654d
LM
iAnEAqqqq