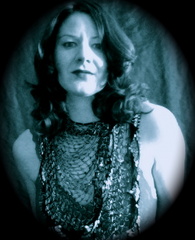 Ms. Jordan started writing songs while living in a small Central Illinois college town. While she had gone to school to study classical voice, she found that she was more interested in writing poetry and attending poetry slams. Wishing to combine her singing and writing, she bought an acoustic guitar at a local pawn shop and learned to play it. In 1999 Erin returned to Chicago, her hometown, to pursue music. Living there she recorded her 2003 folk rock album, Land of Milk and Honey, fronted the folk rock band, Erin Jordan and the Sweet Nothings, and hosted the weekly open mic at the Inner Town Pub. Feeling a need for a change of scenery and a fresh writing perspective, Erin relocated to Seattle in 2005. It was there that she began seriously playing piano, and rediscovered her love of show tunes, and various types of ethnic music, such as Klezmer, Gypsy, and Flamenco. After being a hermit and writing new material for almost a year, she started forming her new band, The Whiskey Romance. The Whiskey Romance combines American roots music with Cabaret and traditional Eastern European folk music. The first member was oboist Jeremy Butkovich. After a few coffee shop gigs as a duo they expanded to include drummer Steven Baz, upright bassist Sean Mack, and several guest musicians who have played trumpet, violin, and melodica with the band. The Whiskey Romance released their debut album, Gateway to Temptation in the Fall of 2008. Exploring the theme of temptation, the songs range from the humorous 'Jane', warning young boys of the dangers of loose women, to the sultry Klezmer tinged love song, 'Unrequited', to the Mariachi style murder ballad, 'Corpus Christi'. In 2008 Erin also joined the Old Timey Americana band, Bakelite 78, playing piano and accordion. The next fall Erin and Robert Rial of Bakelite 78, her fiance and musical partner, set off on an East Coast tour to promote their solo acts. With the success of their musical collaboration as a duo, they decided to form a new two piece group, The Cabarailers. Erin can currently be seen playing solo shows, as well as shows with Bakelite 78 and The Cabarailers.

It varies based on who I am playing with - for a solo show all I need is DI boxes for my keyboard and guitar, unless there is a real piano, which is always a dream come true.

Review for Gateway to Temptation by Sepiachord
Gateway to Temptation" is the first release by Seattle quartet (Erin Jordan and) The Whiskey Romance. It's a wonderful and delectable debut.The music here has a bad...
Review for Gateway to Temptation by FAME
Erin Jordan writes with a dark and droll pen, sings in a flapper floozy / jazz moll mode, and wields a trio of instruments (piano, guitar, accordian), but what really intrigued me about this...
Weekly Picks! by Seattle Weekly
Self described as a "hobo cabaret," The Whiskey Romance creates an atmosphere somewhere between a gin joint and a jug-band hoedown with their crowd participation mandatory shows and lively...
Review for Land of Milk and Honey by South of Mainstream
(Review for Land of Milk and Honey)The title of the first song on Erin Jordan's CD is "Road to Eureka". Eureka is a lovely hippy town in California. That first song's title would have been an apt...
Review for Gateway to Temptation by Collected Sounds
he vaguely retro strains of Erin Jordan and her band has a very special sound. Jordan comes across as a sibling to Erin McKeown and Jolie Holland and her band match her well.Jane is an up-tempo...
p
A
n
E
F
Song Title by Artist Name
987654d
LM
iAnEAqqqq