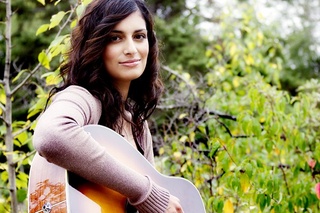 Raised in Edmonton, Alberta, Canada in a musical family, Erica has always had a passion for music. Since begging her parents to let her take voice lessons at age 11, she has grabbed at every opportunity to be on stage, whether it was singing in a school play or performing the national anthem at an assembly. For more than 10 years, she has been singing at festivals and talent competitions all over Western Canada, including the Alberta Tattoo at Rexall Place, Calgary Stampede, Big Valley Jamboree, and Canadian Search for Miss Universe. In 2003 and 2004, Erica represented the City of Edmonton as Klondike Katie during the Edmonton Klondike Days (now Capital Ex), performing 50 times during the 10-day festival. Working towards unveiling more of herself through music, Erica recently recorded her first EP, Where My Heart Goes - a collection of original songs that share snapshots of experiences from her past and present. Her powerful voice conveys emotions that many of her listeners can relate to – the humbling of gratitude, the contentment of love, and the fear of abandonment. A portion of the proceeds from the album will go towards One International Poverty Relief, a school for street children in Mumbai, India where Erica volunteered and was inspired to write the last song “Thank You.” The album has been featured on CBC Radio and community and college stations across Canada. Performing with her piano and guitar at coffee shops, tea houses, churches, living rooms, open stages, parks, and festivals, Erica continues to enjoy the connection that comes from sharing her own music. Sounds like: A folkish pop-y pianolike guitarish mix...straight from the heart.

"Park Native Releasing her First Album" by Catherine Griwkowski, Sherwood Park News, February 16 2010
Erica Viegas was driven to play music from the beginning.When she would see a performer, she would go up and ask how the singer got the gig. Sometimes at a mall gig she got to sing with a...
"Good Girls With Guitars" by Sandra Sperounes, The Edmonton Journal, March 4 2010
Girls didn't just own the podium at the Olympics.They're also staking their claim to the stages in and around Edmonton, thanks to an influx of up 'n' coming girls with guitars such as Erica Viegas,...
"Hidden Gems of Alberta" Television Feature by Access Television, May 26 2010
CD Review by Kindah Mardam Bey, Press +1 Canadian Entertainment Magazine, March 6 2010
Edmonton has something special in the drinking water. Listen to a songbird like Ann Vriend, or the newest songstress out of the city, Erica Viegas. Viegas' first EP, Where My Heart Goes, is a...
p
A
n
E
F
Song Title by Artist Name
987654d
LM
iAnEAqqqq