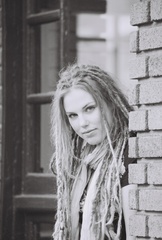 Armed with her acoustic guitar, powerful voice, and a passionate flair for a life less ordinary... Elke Robitaille is an enthusiastic and self-managed folk songstress. Hailing from British Columbia, Elke is very nomadic and never stays in one place for very long. For this reason, the place that she feels most at home is on stage. No matter what town or city she’s in, whether it be at a club, cafe, or festival... the familiar and thrillful experience of performing is what Elke finds to be the most comforting and rewarding. Being no stranger to life on the road, Elke now has two national tours of the United States and Canada under her belt, having performed in 6 Provinces, as well as 25 States. Elke also completed a 4 month contract with Princess Cruises, where she performed daily onboard the Diamond Princess. Los Angeles is where Elke called 'home' for the past few years, and she involved herself in as many aspects of the music industry as possible: from attending Musicians Institute, to working as SYNC Manager at Nettwerk Music Group, and performing constantly in the LA Music Scene. She took home the Rock City News Award for "Outstanding Folk Band" in 2005, with nominations in 2006 as well. Currently, Portland Oregon is the northwest native’s home base. After completing an 18 week Tour of the US and Canada, Elke decided to take a break from touring, and settle down in one place again. With a plethora of inspiration from life on the road, Elke compiled a new work of songs and began recording her third album - “Flowers in the City” at Toadhouse in Portland. Elke’s discography spans from 2002 to 2009 with 3 full length studio albums, released through her own independent label: Rag Veda Records. Her albums, as well as live shows, have gained national press and radio attention. “Flowers in the City” is the brand new 2009 release. The 10 song album features a mix of folk, pop, rock, and even bluegrass. This album showcases some of Elke’s best songwriting to date and is sure to be a favorite for folk fans everywhere.

Inclination Webzine by Lissy MacMillan
Elke Robitaille’s "Flowers In The City" is her third release, inspired by her time touring the US and Canada, which you can really hear in her song “Home”. This folk singer, originally from British...
p
A
n
E
F
Song Title by Artist Name
987654d
LM
iAnEAqqqq