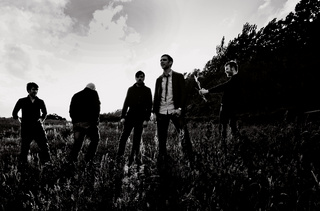 This year has seen many big things for the band, like a sellout show in New York’s Mercury Lounge with critical acclaim from around the world after three showcases at South By South West. From this, the guys eagerly returned to studio to work on their album, due later this year. On the 21st of July, DBN released their 2nd official single 'Departure', "Throwing anthemic shapes, this wedge of mournful indie-rock is beautifully crafted, the initial spark becoming an inferno before raging its way into an eminently epic chorus" Alternative Ulster Magazine - Single Review. With 2007’s AA side ‘Fears of Men/In Denial’ still receiving plays on both sides of the Atlantic, it was a sure fire cert that this song would only follow suit. Although busy with recording the album, DBN have been gigging constantly to promote and endeavour, to enjoy and experience what being in a band is all about

U.K/U.S/SXSW 2008 by
Playing heartfelt anthems of love and loss for the heartbroken, Driving by Night are mere steps away from the adulation that they deserve" - Morning Star, London A charismatic, fiery performance...
p
A
n
E
F
Song Title by Artist Name
987654d
LM
iAnEAqqqq