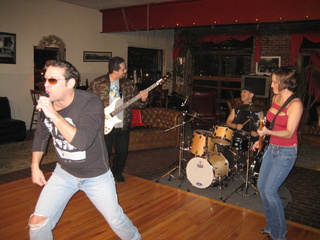 This is Michael Sutton, publicist for the New York-based artist DOTMIG (http://www.dotmigmusic.com). DOTMIG is a thrillingly electic artist who is able to effortlessly leap from classic rock to punk to blues to Americana to dance. There are no boundaries to the man's creativity, his varied material tied together mainly by his knack for toe-tapping pop hooks and upbeat, sometimes humorous vibes. His tunes are definitely rooted in New York culture, in terms of its unpretentious attitude and lyrical references such as "333 River Street. DOTMIG recently released the album Sexy-N-Lean, which has received rave reviews from online music critics thus far. Adam Harrington in Whisperin & Hollerin compared one of DOTMIG's tunes to the Ramones and praised him for his "nuttiness and fun...It's like he threw various musical styles into a blender and told us to drink up, no questions asked." Kit Burns in Overground Underground said that DOTMIG is the "most invigorating alternative to these gloomy times...delivers a funny, toe-tapping romp with speaker-blowing guitars and positively good times. Even more impressive is how DOTMIG is conquering the world of Internet radio as several tracks landed on the RadioWave charts with major-label acts for online radio airplay, quite an accomplishment for an unsigned act. DOTMIG is currently being promoted to FM radio stations nationally, and the Carson Daly program asked for a press kit, which was sent to them and is being seriously considered

Post AlternativeThe New Faces of Alternative Rock by Written by Kyrby Raine
Post AlternativeThe New Faces of Alternative Rock Home About An Interview with DOTMIG April 18, 2008 Written by Kyrby Raine Believe it: One of the most intoxicating, absolutely infectious albums of...
Goin' to the top by y: Madeline Friedman, Current
Goin' to the top Hoboken musician reaches for success with party album By: Madeline Friedman, Current staff writer 01/25/2007 Email to a friendPost a CommentPrinter-friendly Musicians can have...
DOTMIG’s ‘Sexy-N-Lean’ offers sunny alternative to by Reviewed by Kit Burns
Reviewed by Kit Burns There's nothing better in chilly, rain-soaked weather than, well, an album that will remind you of the sun-drenched days of summer. Sexy-N-Lean, from the artist known as...
Reviewing: Sexy-N-Lean by author: Adam Harrington
Whisperin & Hollerin Reviewing: Sexy-N-Lean This Review 'DOTMIG' 'Sexy-N-Lean' - Genre: 'Rock' - Release Date: '2007' Our Rating: 8 out 10 stars Any album with a title with a title that...
333 River Street,” the opening fireball by Reviewed by Kyrby Raine
Reviewed by Kyrby Raine If the Ramones were fronted by the late Bon Scott of AC/DC and crashed Black Flag’s “TV Party,” you’d have “333 River Street,” the opening fireball shout-a-thon on DOTMIG’s...