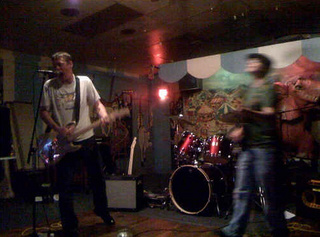 The Daylight Titans live and love in Austin, Texas and play post-punk power pop for the people of Earth. We have played venues large and small, glamorous and disreputable. If you have a stage, PA and crowd, we'll conjure visions of rock n' roll glory before your very eyes. We are both easy and usually pretty cheap (unless you have corprate sponsorship)... Irreverence is guaranteed.

From TV Show Radio: "10 Questions With" Feature by TV Show Radio
1) We'll start off easy... SUV or sports car? Sports cars all around. Two of the guys in the band actually drive in amateur races (one has a Honda S2000). I also can't imagine driving an SUV with...
Pop Culture Press; Issue #61: Fall/Winter 2006 by Pop Culture Press
Well, Austin quartet Daylight Titans released a fine EP a year or so ago, but as it turns out, that one was just kind of a dry run for this, their eponymous full-length debut. This is the kind of...
"Rock and Roll Postcards from France" by The Rock N Roll Report
THE DAYLIGHT TITANS -Self Titled (http://www.daylighttitans.com/) Attention talent!!!! cet album est en train d'user mon lecteur cd!!! le premier album de ce combo d'Austin me fait tourner la tete...
p
A
n
E
F
Song Title by Artist Name
987654d
LM
iAnEAqqqq