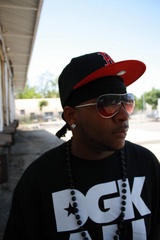 Kevin Nolen aka Cuddy KEV, a sacramento based Songwriter/Hip Hop Artist was born on August 20 1990. During his younger years in his life he was destined to become a performer. At the young age of 12 was when he started writing his own songs and recording them at his home. Though his songs were very low budget at the time they still caught the ears of young and older people. Now, older and more mature, at the age of 17 he is recording at professional studios and writing more songs than ever. In 2007 as a junior in high school Cuddy KEV was noticed and interviewed by his school newspaper as one of the up and coming artist of that year. Since then he has been making alot more of great songs and getting even more recognition from schools, students, teachers and fellow fans. A few of Cuddy KEV's influences are Ludacris, Jay-Z, Lil wayne and many more. Whenever Cuddy KEV is writing a song his thinking process is very different from other peoples. When he is listening to a beat he thinks about his fans first, if he hears a beat that he thinks his fans will love then that is the one he goes after instead of the one he personally loves. Next he studies the beat, he listens to it over and over and over again until he grasp the perfect concept for the song. If he is ever unable to grasp a concept for a song that is when he listens to some if his influences music and by that time he has the concept. Cuddy KEV does not curse in any of his songs at all. He believes that curse words are "safety words" and without those "safety words" it forces you to use more brain power and to think outside of the box. He makes music to make people feel good, and music that makes them want to get up and dance. That is what Cuddy KEV is all about, having a good time and making good music. I believe that is what sets him apart from any other artist at his age. Cuddy KEV was born in San Jose, CA with his mother Sandra, his father Johnnie and his two older brothers Johnnie Jr. and Vincent. In 1996 Cuddy KEV and his family moved to Sacramento,CA and have been living here ever since. And here is where is plans to further pursue his music career.

A Mic and a Stage

WMMR Radio by WMMR radio
In the World of Hip Hop comes a fresh new talented Artist by the name of Cuddy Kev, at only age 17 this young man has maturity beyond his years. Cuddy Kev has taken the path to provide the...
Yung Artist Make Us Hip Hop Highschool by Laguna Creek High School
On March 5, 2007 Cuddy KEV was interviewed by his high school for being one og the best up and coming artist at the high school. He was credited for having great music and also expressing himself...
California State Fair by California State Fai
Cuddy KEV was Awarded with an excellent performance award
p
A
n
E
F
Song Title by Artist Name
987654d
LM
iAnEAqqqq