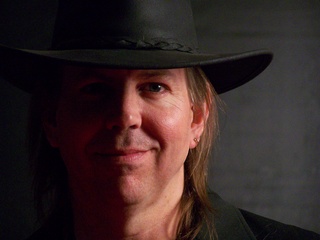 Brent Bennett has been working professionally as a musician for over 20 years, playing in bands in Indiana and California. He has a huge archive of original music ranging from rock to blues and country. Brent performed with bands in California, opening for such artists as John Waite and Echo & the Bunnymen, before returning to Indiana. Since then, he has played with Roadapple and Gypsy Runner, performing at the Vogue and Verizon Wireless Music Center. He formed Stones Crossing with Rob York, where he played lead guitar and fronted the band. His involvement with Ballast resulted in the band's self-titled 2000 album, on which he wrote all the songs as well as providing lead vocals and guitar. Brent also worked with Sindacato, playing bass guitar and contributing an original song, “My Kind of Woman,” to the band's 2005 album, “The Cord.” He is a Raven West Guitars endorsed artist.

Brent Bennett, It Must Be the Blues by Scott Shoger, NUVO Magazine
Four stars A faithful tour through electric blues and R&B classics guided by Southside guitarist and guitar teacher Brent Bennett. Bennett’s one original is the title track, a power ballad...
Last week: Songwriters Café by Scott Shoger, NUVO Magazine
Friday’s initial instalment in the monthly Indianapolis Songwriter’s Café seemed a success on all accounts: The show was well-attended, the three singer-songwriters — Bill Price, Frank Dean and...
Brent Bennett & The Movers by Audra Irvin, NUVO Magazine
Zanies Too Friday, June 22, 10 p.m., $3 On Friday, Indianapolis will get a little taste of something Australia and Europe have been raving about. Residing locally, singer-songwriter Brent Bennett...
p
A
n
E
F
Song Title by Artist Name
987654d
LM
iAnEAqqqq