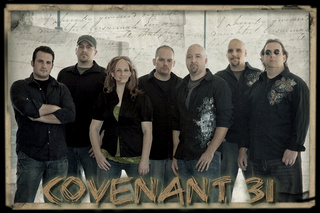 About Covenant31 Before having played music together we sought the Lord through prayer to see whether He could use us to minister through music. After several weeks of prayer we all felt that God could use us despite our weaknesses. We wanted to sing praises to our God and to minister through music at whatever level He could use us. Patrick and Heather Eddolls are the main vocalists and were saved in 1994 after a lifestyle of drugs, immorality, and darkness. Patrick and Heather use to play music in the local bars, until Christ pulled them from the kingdom of darkness, into the Awesome KINGDOM of light. Amen - to God be the Glory! Patrick - the main songwriter and acoustic guitar is a worship leader for his church and has written most of the Covenant31 songs. Jake Wallace is our electric guitarist, harmony vocalist and a worship leader at his church. Zack Wallace plays the keys for us as well as his church. They are brothers and come from multiple generations of musicians. They love Jesus, and with the gifts God has given them they have no greater joy then lifting high the name of Jesus. Last but not least is Jared Willis our bass player, and Jared Haxton our drummer. When Willis isn’t playing for us or his church he is a police officer and also a great source of comic relief. Haxton is our quiet brain, he is always pursuing Jesus and with his abilities as a drummer and worship leader for his Church, he is invaluable to the group. We want our music to be encouraging, convicting, and showing the majesty of the One True God. Our lyrics will always give The Word, which is the only way man can be saved. "We are not ashamed of the Gospel!"

Covenant31 Taking the Next Step by Prescottenews.com
Covenant31. They are, in the most literal sense, a “garage band.” But, in reality they have a much deeper mission than a stereotypical band. Covenant31 is a group of four area Worship Team leaders,...
p
A
n
E
F
Song Title by Artist Name
987654d
LM
iAnEAqqqq