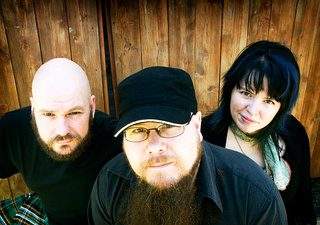 RELIX MAGAZINE REVIEW- “Chris Colepaugh is all about the melody. That’s not to say that this son of Southern blues doesn’t rock. Just listen to what happens when he unleashes his doubleneck Gibson on tunes such as “Some Things Never Change” on his latest album Missed a Page. Guitar riffs don’t get much thicker than this. But Colepaugh is more of the school of Stephen Stills restraint than Lynyrd Skynyrd abandon. Listen to how he holds back the instrumentation—just enough—on “Some Time Away.” The effects are enticing vocals that float on top of the musical stream, underscoring the strong yet dreamy message. As if that’s not enough variety, Colepaugh mixes it up a bit, adding steel guitar and slow burning percussion to the blues anthem “What You Need.”  Whether it’s on stage or on the radio, Chris Colepaugh and the Cosmic Crew have created the perfect blend of jam and blues. And with their multiple ECMA award-winning album Missed A Page, they do southern blues-rock right. Two decades of touring Canada and the United States including support spots to artists such as Gov’t Mule, The North Mississippi Allstars, Grady, and Big Sugar, have allowed Colepaugh & Crew to develop a legendary live show and a reputation for musicianship.  Quotes " Fans of soulful southern rock should check out the new album from Chris Colepaugh and The Cosmic Crew, Missed a Page, which was released this past Tuesday. This is the eighth album for the band and they continue to produce masterful tracks that only seem to improve. Missed A Page is a smooth blend of classic rock and meaningful lyrics with a twist of southern twang that is only intensified by the use of the pedal steel guitar" The Argosy, Album Review CCCC Missed A Page "Colepaugh first caught my ear at SXSW a few years back with an impressive blast of blues-influenced rock. If you like muscular guitars and melodic rock riffs, , you’d be hard pressed to find a better song (Some Things Never Change ) , or heck, a better release, this year." Twangville.com , John Mayer’s review/playlist " I was blown away by the Canucks Chris Colepaugh and the Cosmic Crew as the gravelly soul in Colepaugh’s voice was a the helm of this band, which can lay down a wicked southern-fried boogie with a kick in the ass. The dude has a cool beard too." Jambase.com / SXSW Showcase review “There may be a very simple reason for the influx of the Candian music talent in the Untied States. Just ask fellow northern neighbor Chris Colepaugh , recently signed Gibson artist who, along with his band, Cosmic Crew are quickly establishing themselves among the ranks of successful Canadian acts to cross the border." Gibson.com USA Artist profile "Vocalist/guitarist and his Cosmic Crew deliver old-fashioned rock crossed with alt-country. Sounds like Gov’t Mule meets the Jayhawks." Explore Music "Moncton’s Chris Colepaugh and Lynn Daigle are the Cosmic Crew, and they transform this Eastern community into a rolling and rocking landscape where one swears they can actually see the Golden Gate Bridge off in the horizon." EXCLAIM: Toronto, ON
INDUSTRY RECOGNITION
- Nominated 2012 East Coast Music Awards (ECMA) Group
- Nominated 2012 ECMA Producer
- Winner 2011 Music New Brunswick (MNB) SOCAN Songwriter
- Winner 2011 ECMA Fan Choice & Rock Album
- Winner 2010 MNB Musician of the Year & Rock Album
- Nominated 2009 ECMA Entertainer
- Nominated 2008 ECMA Single “Caught Up To You”
- Winner 2007 Contact East Touring Excellence Award
- Semi-Finalist 2007 Starbucks Music Maker Competition (Vermont)
- Sponsored by Gibson Guitars, Traynor Amplifiers and Sennheiser Microphones
- Chosen in 2004 by Canadian Musician Magazine as one of Canada’s best unsigned bands
- Grand Prize Winner 2002 NB songwriting competition
- Finalist in the CBC Great Canadian Music Dream televised performance
- East coast talent search winner with producer Kevin Scott MacMichael (Robert Plant)

August 2008 Rock with the Legends

COLEPAUGH – IN YOUR BACKYARD by ARGOSY – Mount Allison Univers
As I write this, the first snow of this winter is falling outside, which is kind of funny, because In Your Backyard, the latest disc from Chris Colepaugh and the Cosmic Crew, is a perfect summer...
Hinterland by Here NB
I've seen a guy like Chris Colepaugh in front of 1,000 people and I've seen him in front of 15 people and he plays the same way, just takes over the stage. I have a lot of respect for people who...
UK Review of "In Your Backyard" by Leicesterbangs
Sources inside the Ministry of Taste today confirmed that the thirty year embargo on 70’s Rock has officially been lifted. Which is very good news for Canadians Chris Colepaugh and the Cosmic Crew,...
Jambase.com SXSW Review - Austin, Texas by Jambase.com SXSW Review - Aust
I was blown away by the Canucks in Chris Colepaugh and the Cosmic Crew as the gravelly soul in Colepaugh's voice was at the helm of this band, which can lay down a wicked Southern-fried boogie with...