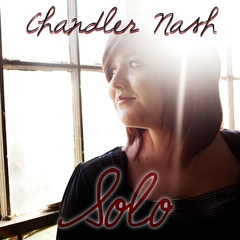 Few 17-year old musicians can claim veteran status with a straight face. Dallas singer-songwriter Chandler Nash is one. Her previous band, The Bella Cullen Project (formed with two friends at a sleepover when they were just 13), enjoyed well over 1 million MySpace plays; released 2 full albums containing 25 original tracks; performed live nationwide; and was featured on MTV, ABC’s Nightline and in Esquire, People and CosmoGirl magazines. Yet, as she embarks upon a solo career, Chandler shows none of the cynicism that curses so many experienced artists. “I just want to keep playing,” she says. “Since I was 6-years old I’ve always wanted to be a musician. Even if it doesn’t work out, I’m still going to play music even if I’m just a wedding singer or something!” Moving away from her old band’s folky sensibilities, Chandler is now melding diverse influences into contemporary and robust pop/rock expressions flecked with lurking country heartache. On her debut EP, the aptly-titled Solo (released through Interscope Digital Distribution), Chandler’s increasingly accomplished songwriting connects through her emotive, lithe-yet-lived-in timbre. “I like a little bit of everything,” mulls Chandler. “[But] my favorite artists are kind of oldies like Billy Joel, The Beatles and Elton John.” While many young, ambitious artists let themselves be molded by producers and Svengalis, Chandler writes for herself, from the heart. “If something big happens, then I’ll write about it,” she explains. “That’s why my songs mean so much to me – because I pull from my own experiences. There’s this one song [on Solo] called ‘Gotta Get Out Of Here’ that’s about my best friend since I was 6 or 7. We stayed close through our freshman year, but then some tragic stuff happened in her life and we lost touch. She’s always been on my mind, so I wrote about that.” At age 17, Chandler has already composed or co-written nearly 40 original songs. With her adult life just beginning with endless new experiences on which to draw inspiration, fans can anticipate a growing catalog of Chandler's original music. Live performance is a pillar of Chandler’s passion and, despite still being in high school, she performs regularly in both a solo capacity and with a full band. “There’s just something a little more intimate about doing an acoustic [solo] set, because you get to talk to people more and it’s very raw – it’s just you and your voice. But it’s easier when you’re playing with a big back-up band to kind of let go and let the music take over and really connect with all the people in the audience.” Though Solo is now showing the world how far Chandler’s come as an artist, she retains the charmingly wide-eyed outlook that sets her apart. “Of course I have huge dreams,” she concludes. “I just want to go further but, even if I don’t, it doesn’t matter to me so long as I’m playing. But I hope that it gets bigger and that I can tour around the country and get a bigger fan base, and maybe play at venues that I’ve been dreaming about playing since I was younger.” chandlernash.com myspace.com/chandlernashmusic

New Music Critiques by Music Connection Magazine
Dallas native Nash has strong resonant pipes that she uses to full advantage on her crafty originals. Despite her young age, she imbues her recordings with something that suggests a maturity way...
"The real deal!" by Women of Substance Radio
She's only 16 but has more maturity in her music and lyrics than most people twice her age. Her songs are acoustic-based and melodic while being multi-layered and edgy." Bree Noble, Women of...
p
A
n
E
F
Song Title by Artist Name
987654d
LM
iAnEAqqqq