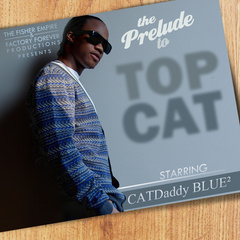 Hailing from one of the most respected neighborhoods in Queens, South Jamaica has and will continue to produce amazing talent. With a smooth tone speech and laid back style of rap his name alone best describes him. He is none other than CATDaddy BLUE². Some say he’s a pimp, some say he’s just too smooth, he simply replies “I’m just BLUE²”

With his up and coming mixtape entitled “3shade 3ways L.E (Ladies Edition)”. CATDaddy BLUE² has been working diligently to create a buzz and stir up attention for label as well as his music. From doing shows all over the 5boroughs and even out of state showcases (CT, Mass etc.) you would only have to see for yourself that it’s working in his favor.

Like most inspiring artist BLUE² started creating songs at a young age. Poetry really, but that started to convert into songs as he progressed in life. As a young kid growing up in South Jamaica Queens BLUE² was considered a quiet type of kid. Even though quiet, he could always grab the attention of any age group. It seem to be like entertaining would be apart of his life style. Developing from the quiet kid to the cool, laid back smooth guy. Poetry & music started becoming a major part of his life. The poetry was the creative side of BLUE² and music gave him a sense of style. This was all at first a hobby. An easier method to converse with a young lady potentially leading to her having interest in BLUE². But like I said, South Jamaica is full of talent and meeting some influential peers (M-Stars & other artistes) in high school and throughout the neighborhood. He started to take his craft seriously and rapidly became apart of the competition. This lead him to becoming 1 of the top performers in Queens from participating in a city tour with P.A.L (getting lots of love from all 5boroughs) and performing at clubs like Speed, The Remote Lounge, and other varies stages. It was said multiple times that CATDaddy BLUE² knows how to control and rock a crowd.

CATDaddy BLUE² brings that classic feel to the current hip-hop game. The way he speaks and delivers his words you could tell that he’s influence by those old timers who stood on the corner kickin knowledge to the young cats coming up in the world. His music is strongly based on his life experiences as well as others. So it’s easy to feel thee emotion of “Giving Flowers” or understand the conflicts of “Love on a 2way st”. I would say that CATDaddy BLUE² has thee greatest amount of potential to becoming a great figure in Hip Hop. And from the words of CATDaddy BLUE² himself; “I am not trying to come in the game and take over I just want to accomplish goals open doors and if I make history, I make history”