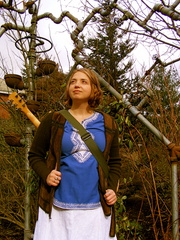 Carley Baer is not your average chick with a guitar.

She has a confessional writing style that is introspective rather than imperative, but what this songstress has going for her most is her voice. Alternating between soft subtlety and brazen belting, she possesses a range that most singer/songwriters only dream about.

Music was a huge part of her life beginning in the early 80s, as she grew up figuring her way around a 20-key Casio keyboard. Once her musical tendency was made apparent, she was encouraged to play the violin; however, she politely declined the study, and instead set to teaching herself the guitar.

Now, almost a decade later (and several hundred live performances around the country), Carley has drawn a definite bead on her natural style. Once consumed by the stereotypical girl-with-guitar-sings-unrequited-love-songs mania, she has evolved into a rational, self-examining storyteller. She explores everything from traveling by train due to an all-consuming fear of flying, to working dead-end retail jobs, to pondering how life might be different if she were a squirrel or jellyfish. She dedicates entire songs to "bunny pigs," and bookends every performance with a self-depricating humor that endears her to all who cross her path.

She has self-released two albums and is eagerly anticipating the release of her third, due (hopefully) by the end of this year.