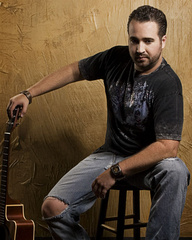 Brian Curtis is an up-and-comer on today’s Nashville country music scene. Not your everyday, southern-bred country singer/song-writer, Brian’s roots run deep in Northern California. Raised in a small town outside of Sacramento, he remembers writing songs in his head as young as eight years old. In high school and most of college Brian set music aside for the more traditional sports and fraternity life - yet he always felt that pull back to his creative, artistic side. Toward the end of college, Brian picked up a guitar and began learning on Garth, the Beatles, James Taylor and John Denver…and the wheels were in motion. After graduating with a degree in International Business, he decided to spend some time traveling and experiencing the world with a guitar in tow. During a stint in Japan, teaching English, he hooked up with a band and began singing covers of all the country hits of the 90’s. He quickly developed a large fan base and found himself playing to packed houses in Tokyo, Osaka, and other live venues throughout Japan - belting out hits from Garth Brooks, Clint Black, and George Strait. His vocal range allowed him to sing, spot-on, any song he chose. However, it wasn’t until he moved on to Lake Como, Italy that music started to reveal itself as his true passion and calling. In a small lakeside Italian town with few foreign residents, Brian quickly found comfort and inspiration in his music and songwriting. It was during this key time in his life that Brian decided to move to Nashville and make music his primary focus. Once in Nashville, Brian quickly created a buzz, landing writer-round bookings at The Commodore, Bluebird Café, and French Quarter Café. He continues to return to Japan twice a year to play with his Japanese country band, in addition to playing clubs in and around Nashville on a regular basis. His songs range from boot stompin’, high energy tunes, to emotional ballads that quiet an audience, and bring to life the phrase “you can hear a pin drop”. His songwriting is clever and memorable; however it is Brian’s distinctive vocals that continue to set him apart from other artists. Brian has spent the last year providing lead vocals as a demo singer in Nashville studios, and was nominated for the 2008 Male Demo Singer of the Year. He has played the famed Bluebird Café as a feature artist this year, and passed on an opportunity to sign with an independent label, while he was busy refining his songwriting skills and building a more extensive catalog of future hits. His self-penned song “The Toast” hit #14 on the top 40 of the Europe International Country Music Charts, and he is scheduled for a European radio tour in early summer 2009. He looks forward to his first release to American country radio, “In the Right Now” in July of 2009. Keep your eyes and ears open. There are big things to come from Brian Curtis!

Chasing Down Those Nashville Dreams by Folsom Telegraph
Brian Curtis, a 29-year-old graduate of Oak Ridge High School and a native Californian, has a song in his heart. In fact many of them, but there’s also room Nashville, his new hometown, and Japan...
p
A
n
E
F
Song Title by Artist Name
987654d
LM
iAnEAqqqq