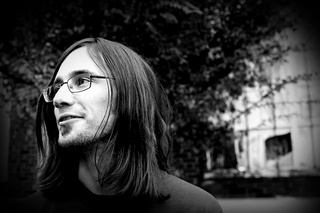 Trappings of the late 60's folk rock coat a modern acoustic soul. Texas singer-songwriter Bob Barney says that he wants you to hear in color. His vocals are smooth, and his songs are like big globs of icing on a hook. If you’re not into hooks, Barney’s compositions are melodic and full of poignant imagery and a dash of orange zest. Bob is currently in the studio working on his 3rd ep Blood Red Beats, which is slated for release late summer 2010 and will include six original tracks produced and recorded by multiple Austin musicians. The concept of the ep is about the realization of inner limitation, and the musical expression of the songs carries a somber feeling, laced with dramatic peaks all throughout. Bass player Jim-Patrick Harris, whom Bob met in San Marcos through an ad in a local paper, has been a nice addition to the songwriter’s performance since early 2008. Bob has had the privilege of some local radio play along with several unique gigs at Texas State University Campus, Austin-Bergstrom International Airport, and even a local record store in San Antonio. Sarah Whited of Music Connection Magazine (Nov. 09’ issue) wrote: “His performance is not intended to whip the crowd into a frenzy, which is why his booking at Headhunters, a traditionally punk/metal venue, was unexpected. Many spiked and leathered patrons drifted over from the inside stage, and a surprising number remained as Barney’s earnest crooning grabbed something inside them.” Be on the look out for Blood Red Beats on iTunes, Amazon.com, and other retailers late summer 2010, and for BobBarney.com for the latest dates, news, media, and exclusive material on all things Bob Barney. Stay posted and “friend us” on Twitter, Facebook, www.Ourstage.com, www.myspace.com/bobbarneymusic, and www.reverbnation.com/bobbarney.