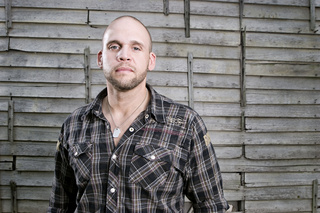 Growing up in the North Carolina mountains, Benton Blount never picked up a guitar or a microphone, much less played a tune. At age 18, his music pastor snuck a microphone up to his mouth and to his and everyone's amazement, a beautiful voice was pouring out. Thus, sparking Benton's passion for singing and writing songs. Benton has been the lead singer for a group called 7-miles since 1997.
Now over 10 years later, Benton has made a career out of performing, and writing music. About a year ago Benton decided it was time to take it to the next level and make the move to Nashville. So, newly married and new to Nashville, Benton is beginning to make his mark in the Nashville music scene and has just recently signed a record deal with Golden Music (www.goldenmusic.biz) in Greenville, SC. The plan now is to make a great record and get out on the road to support his debut solo cd sometime early this summer. Keep checking back here for more updates on Benton and visit:

BENTON BLOUNT GETS CLOSER TO FINISHING DEBUT ALBUM by
Noel Golden and Benton Blount are putting the finishing touches on Benton's debut album for Golden Music before handing it over to mixer extraordinaire David Thoener. David is slated to begin...
BENTON TO PLAY COUNTRY NIGHT AT MAULDINFEST by
Golden Music will showcase their artists, NEW COUNTRY MUSIC SUPERSTARS Williams Riley, Benton Blount and have secured HEADLINER Bryan White. Show starts at 7p.m. and is FREE. Visit MAULDINFEST for...