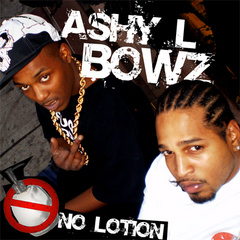 The Hip Hop group the Ashy L Bowz (Ashy Elbows) are not your traditional rap duo however put aside their bizarre name and comedic personalities and outlandish stage show and you have a versatile award winning rap duo with the ability to make hit songs about just anything. Their debut album "No Lotion" was released on Ash Wednesday of 2008 and features Comedian Donnell Rawlings better known as Ashy Larry from the Dave Chappelle Show. The album was selected as a finalist for Rap album of the year in the 2008 Independent Music Awards. The Ashy L Bowz are also 4 time Underground Music Award nominees & 2009 Underground Music Awards Winner for Most Original Group. 2008. The Group is a 2008 Hollywood Music Awards Nominee in the Rap/Hip Hop category. Record Producer No i.d. was also nominated that year in same category. The Ashy L Bowz were crowned unsigned band of the week by High Times Magazine and runners up in the High Times Unsigned Battle of the Bands. Their all Marijuanaa themed mixtape "Going Green^2: 808's and Smoke Breaks" is also featured by High Times and can be found at http://www.hightimes.com/ashylbowz. The Ashy L Bowz are true lyricists with a truly original and unique approach to hip hop music with no creative fears. Their marketing strategies are also dynamic and attention grabbing.Currently the group is working on a few free mixtape releases before release of their sophmore release "No Lotion^2: the Great Repression" set for release on Ash Wednesday of 2010 2/17/2010.www.NoLotion.com

Minimum of 1 Mic and a midget beatboxing

YoRaps.com Next to Blow by YoRaps.com
What happens when you have No Lotion? Ashy L Bowz of course! This hip hop duo from New York City, may at first glance seem like comedians but their punch lines and rhymes put them definitely in the...
Ashy L Bowz RapCapital.com Interview by Rap Capital .com
Today we welcome Ashy L Bowz, out of Brooklyn. Let the Rapcapital.com viewers know your how you guys chose such a crazy name for your group?It just seems like now a day so much of Hip Hop is done...
No Lotion nominated for Independent Music Award by PR Log
THE ASHY L BOWZ debut album NO LOTION Nominated for Independent Music Awards album of the year!NEW YORK based Rap Group The Ashy L Bowz are among a diverse group of independent musicians named as...
p
A
n
E
F
Song Title by Artist Name
987654d
LM
iAnEAqqqq