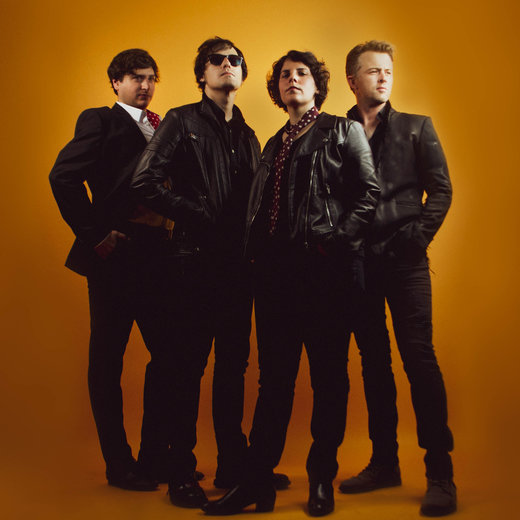 Good music has a catchy rhythm, a hummable melody, and—if you’re lucky—an unforgettable sing-along chorus. But great music has something else, something it’s almost impossible to capture: soul.
Henry Beguiristain and Jen de la Osa have been the soul of Aloud since they were teenagers in Miami. A shared passion for rock classics like the Beatles, Oasis, Aretha Franklin, and Otis Redding led the pair to start writing and recording their own songs. After moving to Boston together to pursue making music as a full-time career, the two fell in love, eventually marrying. Years of writing, recording, and touring fostered deep ties to the Boston rock scene, and helped them connect with other musicians as passionate as they were, including Aloud’s bassist—and the pair’s closest friend—Charles Murphy.
“Our band is more than just the songs, it’s about the love we have for one another,” de la Osa said. “I think it helps to keep us passionate about what we’re doing. Every time we head into the studio or show up at rehearsal, it’s a chance to do my favorite thing with my favorite people. It feeds into the music,” she added. “We can read each other very well.”
Over fifteen years of dedicated musicianship has certainly paid dividends. First on local, then national tours, the band started honing a sound that has earned comparisons to the Alabama Shakes and the Black Keys. Their latest single, “Falling Out of Love”, reveals an evolution of the band, showcasing their incredible harmonies in a soulful ballad reminiscent of the classic Muscle Shoals sound.
The B-side gives listeners a glimpse into the band’s formidable range. Rock-edged with elements of psychedelia, “Empty House” is urgent, with a driving chorus you can’t get out of your head. Together, the songs on the Falling Out of Love single form a perfect bridge between the propulsive pop songs the band has been known for, and their upcoming full-length, a more heavily R&B-influenced effort featuring a full horn section.
“Each new song is a chance for us to explore something different—a different sound, a different emotion,” Beguiristain said. “I think the two songs on the single show where we came from, and where we’re headed next musically. It’s a really exciting glimpse into what makes us tick as a band.”
Between their new single and their upcoming full-length release, it’s full steam ahead. According to de la Osa, this is just the beginning. A recent move to Los Angeles has provided new inspiration, new opportunities, and a new drummer in the form of Chris Jago.
“I’ve never been more excited about the music than I am right now,” de la Osa gushed. “I’ve always felt like creativity is more of a spring than a well—the more you tap into it, the more you get.”
Judging from the band’s incredible trajectory over the years, that spring is showing no signs of running dry any time soon. Show Crush: Aloud by Boston Band Crush
Pound-your-foot pop rock Aloud kicked off the show with Jen de la Osa and Henry Beguiristain trading powerhouse vocals as the hometown heroes... Aloud's songs are sometimes rock and roll, sometimes...
Aloud 'Fan The Fury' by Boston Phoenix
...the hooks are bigger, the lyrics smarter, and the arrangements tighter.
Aloud 'Fan The Fury' by Seven Days
Lead vocalists and childhood pals Henry Beguiristain and Jen de la Osa share songwriting duties and make for well-matched musical sparring partners. But de la Osa wears the pants in this Sonny...
Aloud by Time Out New York
Boston’s Aloud plays brightly agile retro rock with smooth male and female vocals. It’s celebrating the release of a new one, Fan the Fury.
Aloud at the Muddy River by The Wire
The music is raw rock with a hard punk edge to certain tunes, all rooted around a classic Americana core... Osa’s voice is feminine yet forceful, commanding and confident but also capable of...
Aloud members remain vocal on political issues by The Post & Courier
The brainchild of lead guitarist Henry Beguiristain and Jen de La Osa, the band combines two voices for triumphant harmonies. Individually, each singer brings something different to the table. De...
Aloud 'Fan The Fury' by Revolt Media
Aloud brings a strong formula of smart, powerful indie-rock that ranges from slow ballad 'Hard Up In The 2000s' all the way to the pulsing garage-rock tune 'When The Ants Attack The Queen.'" - 4...
All Things Aloud by Pilmgrams of Sound
Aloud is, through all the experiment, mood swings, and live shows, a rock band by the Webster’s definition. Their trick is that they’re aware of where and when they are and embrace the warts as...
More Press by www.allthingsALOUD.com
is available on Aloud's website
p
A
n
E
F
Song Title by Artist Name
987654d
LM
iAnEAqqqq