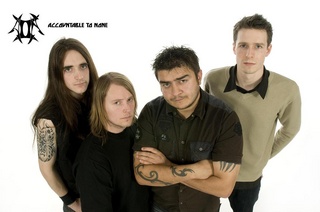 Kings are justly called Gods, for that they exercise a manner or resemblance of divine power upon earth. For if you will consider the attributes to God, you shall see how they agree in the person of a king. God hath power to create, or destroy, make or unmake at his pleasure, to give life or send death, to judge all, and to be judged nor accountable to none." - James I's speech before parliament, March 1609. Rock music ebbs and flows. It has its trends. It has its image. It has its waves, its peaks, its valleys. It has its stars, its icons, its figureheads, many of which burn out and fade away. Accountable To None dont concern themselves with the current rock, Metal climate or with what's cool right now or with constructing an image. Rather, Accountable To None care about crafting tight, solid, unforgettable, and timeless music that will live on long after the members have left this earth. For Accountable To None, its all about the music and only the music. Its about making massive riffs complemented by versatile vocals, finished off by booming percussion and rippling bass rhythms. Its about getting down and dirty and rocking the hell out. This is rock, the way its supposed to be done. "We just do what we want to do which is why we are Accountable To None".

ACCOUNTABLE TO NONE USES AND ABUSES: