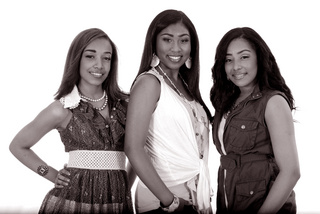 The ladies portray the diverse countries; as well as their music. The countries Dominican Republic, Columbia, and Ecuador represent these young girls that are already causing a sensation in the music industry.All of these girls grew up and developed in the city of New York. Although their first language is English for they grew up in the United States they still sing and speak Spanish perfectly. On their first press kit 2Divine includes the songs “Canto a La Vida” and “Mentiras”. Both composed by Ezequiel Saldana and musically arranged by the well known Dominican arranger Josias Pina. Next song “Confundido” was composed by Yaneiry Saldana and Anabell Garcia with musical arranged by DJ CHUCKY, a famous producer in New York City. Never the less “Quien va a Responder?” which was composed by Carlos Garcia an outstanding Puerto Rican singer/writer and musically arranged by G4L (Yan & Yon). 2Divine was created in the summer of 2005. Shortly before hand Yaneiry, Marcy, Anabell, and Mayra had to leave the kids group “Adonai Kids” (for age reasons). This was where they met and sang together since the year 1998 recording three musical productions for kids. The name 2Divine (which translated in Spanish means “Dos Divinas”) is brought out of the fact that only two (Yaneiry and Anabell) play the lead role on stage. This group is meant to transfer their music to the youth’s hearts with an elated and pleasant message. As well as give positive advices which will sink into their hearts and spirits; and help them enjoy life with no harm. This is the motivation of this project. 2Divine is the new image in the youth of the city that never sleeps, a youth that smiles, that fights and triumph, this is New York.