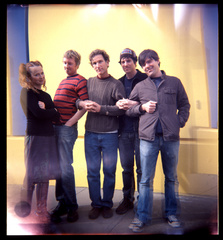 Lyrical tag-team Greg Giles and Kelly Atkins blend seamless co-ed harmonies and catchy but unpredictable songwriting. SF Weekly says: "Some bands are lovable because they sound so dumb: Take the Pipettes or Metallica, for instance. Local jangle freak-pop band 20 Minute Loop is just the opposite, with a distinct sound that says, "These people are perfectly nice, but they are smarter than you and know it. Fear them slightly. They can do math." It's the sound of many other musical aggregations, like early REM, or the Pixies or Sonic Youth. Sudden tempo changes, a total lack of normal chord structure, and difficult vocal harmonies are typical 20 Minute Loop touches, but the overall effect is far from challenging. In fact, it's charming and pretty - it's pop, after all. Interestingly, the group's three full-length CDs hardly do justice to its live show, which is even better and smarter." 20 Minute Loop is currently finishing up their fourth album, to be released in early 2008.

Noise Pop by
On the surface, 20 Minute Loop sound all catchy and good-natured, but there's a mischievous side to this San Francisco foursome (sic) that features boy-girl harmonies and distorted guitars. The...
Pitchfork by
20 Minute Loop is one of the more refreshing musical experiences I've had in months and months. Decline of Day practically begs for stupid music review fantasy hybrid-type descriptions. So here...
SF Weekly by
Some bands are lovable because they sound so dumb: Take the Pipettes or Metallica, for instance. Local jangle freak-pop band 20 Minute Loop is just the opposite, with a distinct sound that says,...
Salon song search by
Unfortunately, this song by the 20 Minute Loop fell astray of our eligibility guidelines and wasn't able to compete for the grand prize, but it was so good we wanted to share it with you anyway....
p
A
n
E
F
Song Title by Artist Name
987654d
LM
iAnEAqqqq