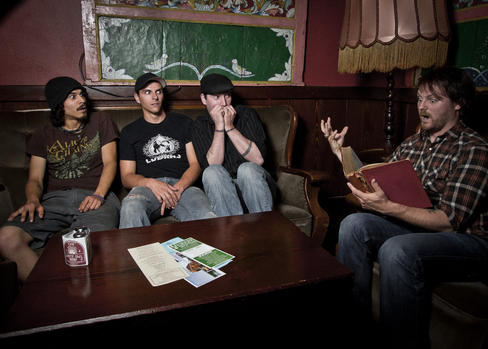 The saga of Dies Drear actually begins thousands of years ago into the future; in early 2007, when Berto moved from Sunny Seattle to Grey and Dreary Gainesville, Florida.
Upon arrival there, he immediately went to a punk rock show, where he saw a shirtless, mohawked sweaty guy rolling around drunk on a stage while sort-of playing guitar. Berto then randomly answered an online ad looking for a cowbell player, and was contacted back by none other than the shirtless, sweaty mohawked guy; who asked him questions about his amplifier for some reason.
Berto thought he probably wanted to steal it.
Enter Silo.
Berto and Silo met up at a show that Silo was playing, and Silo decided to test Berto's commitment level by driving him into the wilderness and making him stand on a porch in the rain for an hour. True story. Undeterred, Berto began learning the songs for Silo's band, but they decided to start a new band instead, and Roman by Proxy was born: Gainesville's most popular non-ska act in at least six months.
After a short but stellar career with Roman by Proxy, Berto had to move back to Seattle since his job as a male stripper was not paying the bills, probably due to the fact that he has the body of an Oompa-Loompa.
Upon his announcement that he was moving back to Seattle, and realizing that he had no talent by himself, he began regaling Silo with tales of the magical kingdom of Seattle: Where the streets were paved with candy, where it was always 80 degrees and sunny, and where it never Rained and definitely never Snowed.
After ten months of unsuccessful panhandling, Silo managed to steal a truck filled with adult novelties (Which was, incidentally, and by sheer coincidence; christened Karl,) and drove it across the United States, selling the truck's contents at truck stops to afford gas, food and lodging.
Upon Silo's arrival in Seattle, the duo did nothing except drink excessively and talk about how awesome it would be if they were in a band.
After a few months, Silo and Berto remembered that they'd seen some dude banging on overturned paint buckets when he wasn't scavenging for food in dumpsters. After making him take a shower, they told him to come hang out in the practice space and pretend to be cool.
Enter Miles.
At this point, Miles mentioned that he knew some dude who had a clubhouse that the band could hang out in, and after an inspection of the totally sweet clubhouse, the band decided that Morgan could join, provided he let the band hang out in the clubhouse and jump on his trampoline.
Enter Morgan.
Now they're playing way too many shows and trying to sell you their album and t-shirts
Go see them. It'll be a party. Tell your friends to come too. Everyone will hang out and eat candy. 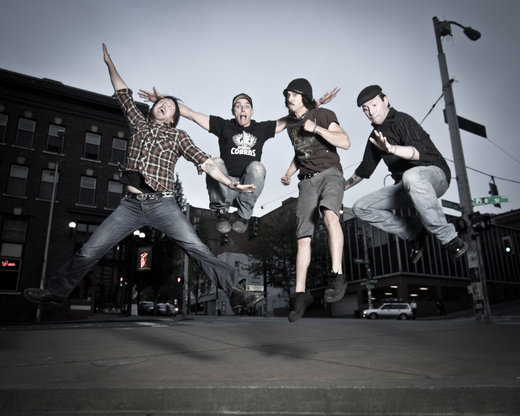