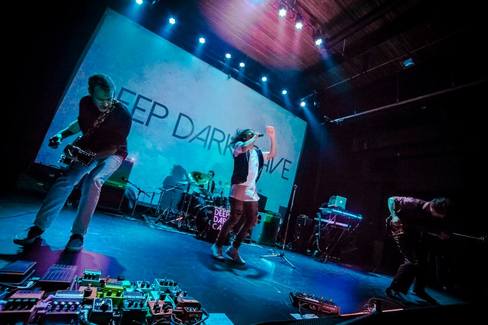 Deep Dark Cave goes beyond what we can physically and emotionally express. Their live show is an electrifying and magnetic performance that leaves you changed. Recently released debut album “The White Light” is a perfect blend of harmonics, textures and effects where no instrument out powers the other. Deep Dark Cave is an indie rock visual experience with high energy players that are no strangers to the music industry. The story of their songs is told through their lyrics combined with impactful onstage visuals and pixel mapping. Whether it’s visuals from the 50s, 60s and 70s or something taken on iPhone one thing thing is certain, it will resonate in today’s world and spark a fire inside you. Created by five musicians with strong creative input and desire, Deep Dark Cave was chosen as one of the top five up and coming bands in 2016 in the annual Uniter Fiver. Their style has been compared to Kings of Leon, A Silent Film, Atlas Genius and The Killers to name a few.

It’s time to get lost in the Cave.