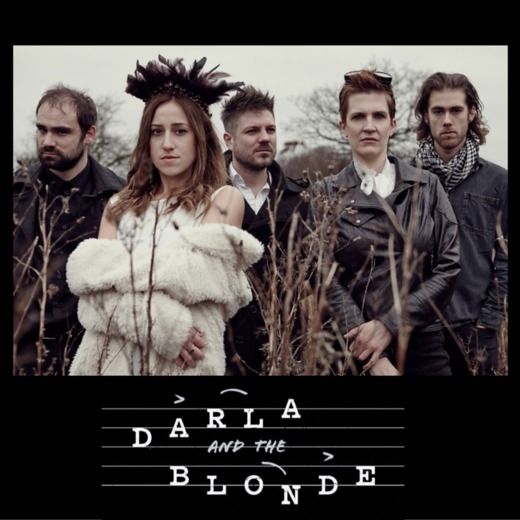 About Darla And The Blonde

Encompassing the seductive glamour of goth, the catchy harmonics of pop, the experimentalism of prog and the narrative traditions of folk, Darla And The Blonde are a broad-based five-piece who craft their influences into a bold and distinctive brand of dramatic alt-rock.   Formed in East London by chief songwriter Nina Lovelace (rhythm guitar and backing vocals), the band are completed by Jen Demaris (lead vocals), Rob McCabe (lead guitar), Craig Page (bass) and Tom Loffman (drums). While Darla And The Blonde’s sound is influenced by the likes of Nick Cave, Patti Smith and PJ Harvey, and their live performances take cues from musical theatre, Lovelace’s lyrics are primarily inspired by the concerns and experiences of inspirational women, both real and fictional, all set to the band’s impassioned and inventive alt.rock sonics.

Having shared taster track ‘The End Of The Party’ in March 2016 – whose searing glam-rock groove underpins an infectious lyrical riff on revolution – to much acclaim, radical Hackney rockers Darla And The Blonde reveal the details of their first full EP, ‘Eugenia’, released on 20 May. The first of five eclectic but equally invigorating indie-rock nuggets, ‘In Admiration Of The Female Spy’ is a melodic musing on the escapades of feminine espionage set to a forceful three minutes thirty of edgy new wave. The dexterity of the band is to the fore as Craig Page’s intricate bass shadows the catchy vocal harmonies through the verses before the chorus is announced by a crescendo of crunching overdriven guitar. Follow-up ballad ‘Vampyr’ has an air of fragile beauty that belies its themes of age, decay and mortality, its celestial vocal pattern meandering across a metronomic tick-tock rhythm that lends the song a further touch of the fantastical. ’The Article’ tells the story of Eugenia Falleni (after whom the EP is named), a female-to-male transgender man who was falsely tried for murder in the early 20th century. Atop the song’s heavyweight folk-grunge score, Jen Demaris and Nina Lovelace’s voices ring out a powerful shanty-like tale to resound long in the mind. Part prog-rock, part widescreen gothic-pop, ‘Hexenhammer’ was originally released as a single on Halloween 2014 and its unorthodox melody lines are a fitting fabulist homage to the novel ‘Dark Aemilia’ by Sally O’Reilly, in which the protagonist dabbles in the dark arts. “If you say his name I’ll lay a Hexenhammer at your door” runs Demaris and Lovelace’s anthemic chorus.'Eugenia’ is released 20 May 2016.