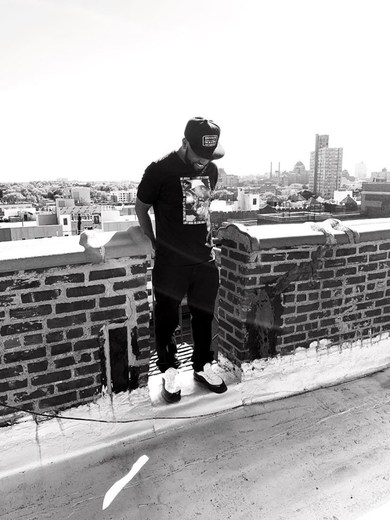 Quickly breaking through to major mainstream success in the hip-hop world, Brooklyn based rapper Ciph remembers being at his late grandma’s apartment in the late 90s and looking down as Jay-Z shot the video for the classic, Grammy nominated “Hard Knock Life” on the streets near the same Marcy Houses housing project where the future superstar and mogul grew up.

Inspired by groundbreakers like Jay-Z, Biggie and Nas, Ciph began writing his own rhymes and fusing his own beats with a confidence that shines through big time on Black Mamba, his first complete album project after first making his mark with his late 2006 “Quiet Storm” mixtape, which was hosted by world renowned mixtape DJ DJ K-Swiv. Ciph dubbed his debut Black Mamba after the codename for Uma Thurman’s shadowy former assassin character—like her, he’s a force to be reckoned with, and after the Black Mamba strikes, the victim (or in this case, the listener) is never the same again.

That’s been the kind of response Ciph has been getting since he first hit the stage in 2005 at a rapper competition at Club Pyramid on the Lower East Side. Putting across the same charismatic, can’t turn away stage presence as Tupac and Biggie and blending it with the easy graceful rhyme flow of Nas, the multi-talented performer captured Brooklyn first, shocking fans with his forceful but cool delivery and showmanship. Opening up for guys like Papoose, Black Rob and Sheek louch of the lox, and performing at hotspots like The Sugar Bar in Manhattan—which is owned and operated by R&B legends Ashford & Simpson—Ciph grabbed everyone’s attention with his ultra-seamless mix of his party side, street side and angry side that drew early comparisons to Eminem. His performance at The Sugar Bar was televised and viewed by over 2.5 million people.

All of this set the foundation for his emergence with the “Quiet Storm” mixtape and appearances on over 50 mixtapes by other artists. He was named one of the best unsigned entertainers of 2006 and his tracks were placed on the “Best Of Look What I Found” mixtape; one of these, “Let’s Work,” was turned into a popular ringtone. Staying true to his name (which draws from the world “cipher,” or a completed circle), Ciph is dedicated to giving listeners a fresh new vibe with every song, hook and lyric; his full range of melodic, groove and poetic talents are out there for the world to get excited about

In 2008 Ciph Released his Debut Album Black Mamba digitally through music stores I-tunes Rhapsody, E Music and Napster  The album showcased Ciph's wild, cool confidence, it was an announcement to the world, hey, if you missed me before, there’s no denying a new presence on the scene this time.

During 2009-and early 2010 Ciph began recording his New EP Some Time In New York City.. Taken after a John Lennon Solo Album of the same Name the yet to be Released Album as Ciph puts it " an artistic view of my life in New York City as I see it" The EP's 1st Official Single "Never Waste Your Time" Featuring Soul singer Phil Geston.. after one listen to this record it is proven Ciph has what it takes and that he is Built to win.