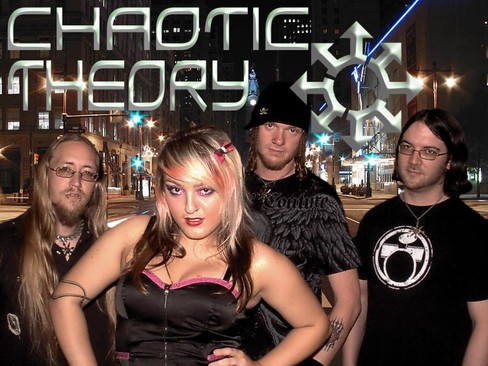 For most of us chaos is an unknown, uncontrollable force with no rhyme or reason. For the members of Chaotic Theory, however, chaos is the way of life, the method to the madness. It is the representation of all possibilities as numbers and variables in the never ending equation of existence.
Since July of 2008 Chaotic Theory has been a musical force, pulling the best and most talented musicians in the area into its folds. Originally a metal band Chaotic Theory has evolved at every twist and turn to grow into the grungy dark alternative band it is today
In its first year Chaotic Theory made huge strides, played many shows, and gained many fans. Unfortunately success was ripped away by the death of their front man and close personal friend Tripp Jenkins who was gunned down in Anniston, Alabama in late 2008
What would have ended most only strengthened the resolve of Chaotic Theory. Over the next couple years they worked harder than ever trying out new ideas and recruiting new talent, all the while revamping and reinventing
In early 2011 all the variables of the musical equation finally stabilized with Brian Denton (Drums) and Brittany Henderson (Vocals) combining with original members Nick Portuese (Guitar) and Chris Collette (Bass) to complete the equation that had been left unsolvable by tragedy
Since then Chaotic Theory has personified the phoenix story and risen from the ashes with a sound and drive paralleled by none
Embrace the chaos, for it is the only true constant......