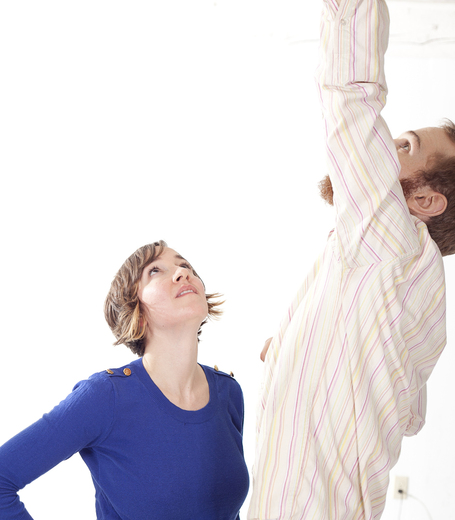 We're a group of musicians - usually 5, sometimes more - from Portland, OR. We play folk, pop, bluegrass, and other genres with the live energy of punk, or whiskey. We got started two years ago when Matt and Kali moved from Boston to Portland and gathered up some of the first people they met to flesh out songs they had written and recorded for their first album (One Shoe Over the Cuckoo's Nest, 2008). Since then we've toured the west coast, gotten a whole lot of people to dance and come up on stage to play a tambourine or a shaker, played a couple local festivals (one for thousands of people, and one for about ten, though that one was in the largest room we've ever been in), got threatened with a law suit by Shel Silverstein's estate, signed onto a local record label, got 80% engaged, and self-released an EP (Don't Wait for the Rescue Squad, 2009) with two new tunes and two remixes by local Portlanders. It's been a good couple of years.

Right now we're feverishly trying to record a new full-length in Matt and Kali's basement, stairwell, bathroom, and bedroom. We're pretty sure it's going to sound pretty different from the last album, but we can't tell how yet. In the mean time, if you want to buy or download anything we've recorded so far, go to http://theasceticjunkies.bandcamp.com and name your own price (including "$0") on either of our releases.
« View This Artist's Complete Profile
Connect with OurStage: Facebook Twitter YouTube FourSquare Newsletter RSS feed
ADVERTISEMENT
?Need help?
Copyright © Amazing Media Group  2006-2023
p
A
n
E
F
Song Title by Artist Name
987654d
LM
iAnEAqqqq