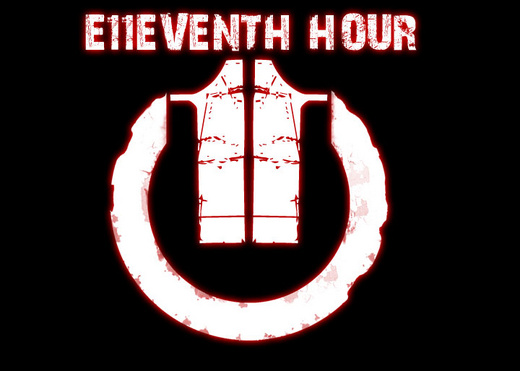 After polishing their musical chops for years in the smokey bars of eastern Iowa and western Illinois, E11eventh Hour broke into the rock scene in 2008 with their debut album, The Hour is Near. The band's latest album, The Hour Has Passed, combines Travis Yenney's blue-collar yarling with back-to-basics guitars to churn out a record full of fist-pumping rock. With standout tracks like "Black Magic Marker Warfare," the music of E11eventh Hour appeals to rock fans and non-rock fans alike.

No, not really. Feel free to disregard that entire paragraph. The band is still relatively new, but based on hard-hitting live shows, has already garnered a great deal of buzz. A tight, pounding rhythm section, thick guitar riffing, and melodic vocals characterize their sound, both familiar and fresh, filling the middle ground between rock and metal.

Drummer Dan Wilson and bassist/vocalist Tony Gothard share a love of classic rock and funk, and are likely to launch into a Red Hot Chili Peppers groove during any lull at rehearsal. Guitarist Dan Banker has a heavy-handed playing style firmly rooted in hard rock and heavy metal, and will typically play twice as many notes, twice as fast as necessary. Vocalist/keyboardist Travis Yenney brings his slightly off-kilter sense of humor and love of cheesy '80s pop to the table, and often finds himself stymied by his band-mates who think they're too cool to play "Billie Jean" on stage.