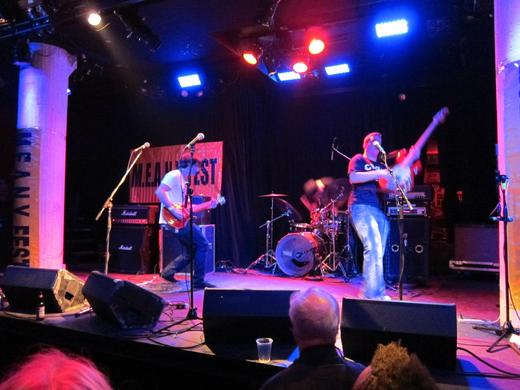 Imagine The Who crossed with Jane's Addiction...

Super Gravity is a New York City based band that was formed by three musicians that met in the bottomless chasm of randomness that is Craigslist. Adam Cane (guitar and vox) posted an ad looking for a bass player and drummer to participate in an impromptu, no strings attached jam down at Funkadelic Studios. Steve Sklar (bass) quickly responded and at the last minute, Rob Machold (drums) noted his penchant for "heavy grooves" and his desire to join in on the fun.

The environment proved to be the perfect mix of raw, unabashed New York City grit that inspires bands to form. That first session was an improvisational exploration of time signatures and juxtaposition - a tacit connection was made.

Out of those early jams songs began to form. After working up 7 or 8 of them (and a cover or two) the band decided to take to the stage.

Their love of improvisation and the mathematics of music held the answer. Combined with the belief in the profound ability music has to bind all people led them to the name Super Gravity. This quantum physics theory associates all matter by identifying an underlying sub-atomic connection.

What could better represent the concept of music?